By Manly Bryant on May 2, 2018
Advertisement 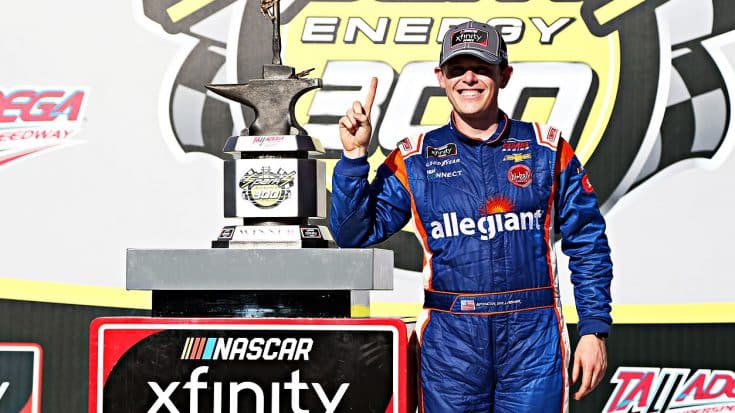 Just days after taking home his very first career win at Talladega, this rising NASCAR star is suspended indefinitely from the sport after failing a drug test.

Unbelievable news today. Unfortunate for all involved with that team. https://t.co/ktvMU6VrHl

Gallagher, who is sponsored by Allegiant Air and drives the No. 23 for GMS Racing which is owned by his father, Maury Gallagher. His father is also the chairman/CEO for Allegiant Travel Company – the team’s major sponsor.

What a day for @GMSRacingLLC. What a freaking day!!!!! We did it guys! ? still have no idea how I did that but what a hot rod. Best damn team in the garage ❤️ See you guys on the boulevard tonight ? #RUNGMS #WEDIDIT pic.twitter.com/V8yZbC2h3S

The young driver had his first career win during the Xfinity Spark 300 at Talladega Superspeedway on Saturday, April 28th. His win virtually guaranteed him a spot in the playoffs, but he has lost that due to this failed drug test.

NASCAR did not reveal when he failed the drug test or what drug he tested positive for, however, it released its findings after being notified by the medical review officer of the violation on Tuesday, May 1st.

“I want to assure everyone in the NASCAR community this one-time error in judgment will never happen again,” Gallagher said in a statement. “I am taking the steps to enroll in the Road to Recovery program supported by NASCAR. I would like to say that I am sorry to all of the GMS organization for my actions, especially my team and team owner, who have worked so hard this year and have put faith in me.”

As he expressed in his statement, he will be enrolling in NASCAR’s recovery program which takes a minimum of four weeks to complete. GMS Racing has not yet announced a replacement driver.

What do you think of the suspension? Do you think they should handle it differently?