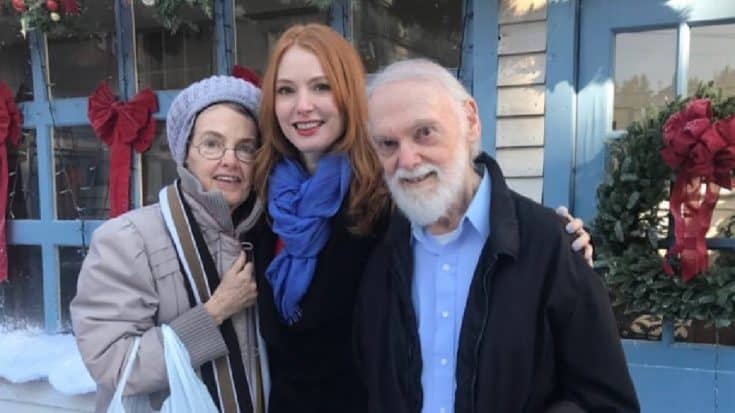 One month after her parents were found dead in their Massachusetts home, actress Alicia Witt is speaking out about the terrifying moment she couldn’t reach them, getting the news of their passing, and trying to protect their privacy in life and in death.

It was only a few days before Christmas 2021 when the 46-year-old actress got scared after being unable to get in touch with her parents, Robert and Diane Witt, for several days.

“I reached out to a cousin who lives close to my parents to check on them. Sadly, the outcome was unimaginable,” she wrote at the time.

Worcester, Massachusetts, police responded to a call to the home around 9 p.m. after a family member requested help checking on the couple. Officers found the couple deceased, but with no obvious signs of what caused their death. “There was no trauma,” Lt. Sean Murtha said.

Firefighters were called to the scene to check the air quality inside the home and found that there were no signs of carbon monoxide or other noxious gases present. A local newspaper wrote that “freezing temperatures, a malfunctioning furnace, a temporary space heater and a home in need of repairs” could have contributed to to Robert and Diane’s deaths, but no official cause of death has been released.

In her first public statement since the death of her parents, Alicia Witt addressed some of the “misconceptions” that have circulated, including the question about her parents’ living conditions. In a delicately worded statement, Witt expressed her desire to honor her family’s privacy.

“I never imagined I would have to talk about this publicly – much less, amidst overwhelming floods of grief. I hadn’t been allowed inside my parents’ home for well over a decade; every time I offered to have something repaired for them, they refused to allow workers into their house. I begged, cried, tried to reason with them, tried to convince them to let me help them move – but every time, they became furious with me, telling me I had no right to tell them how to live their lives and that they had it all under control. It was not for a lack of trying on my part, or the part of other people who loved them,” Witt wrote. “My parents were not penniless. They were fiercely stubborn, beautifully original souls, and with that, they made choices – choices that I couldn’t talk them out of. I did help them, in all the ways I could – in all the ways they would let me.”

Witt also admitted that she struggled with guilt over what she could have done to help her parents “short of petitioning the court system for taking control of two otherwise very sharp, very independent, very capable adults.”

She said they were a “united…indivisible force” and were determined to do things their way. She felts that it would have destroyed them if she had fought them about their living conditions and choices.

“I had no idea that their heat had gone out. I will never understand how or why they made the choice not to tell me this, not to let me help them with this. My heart is broken,” she wrote.

Witt concluded the lengthy post by recalling the last words she exchanged with her parents. “Our last words to each other were ‘I love you.’ That part was simple; never in doubt. They loved me so. I loved them so.”

Robert and Diane Witt had two children, Ian Witt and Alicia Witt. Alicia is known for her roles in movies such as Mr. Holland’s Opus and television shows such as “Friday Night Lights” and “Justified” among many others. She had a recurring role in “Nashville” in 2016 as country singer Autumn Chase.

Robert Witt was 87 and Diane Witt was 75 at the time of their deaths.

Our thoughts and prayers are continue to be with Alicia and their family.

Read Alicia Witt’s full statement regarding her parents’ deaths below.