By Jennifer Pernicano on September 9, 2020
Advertisement 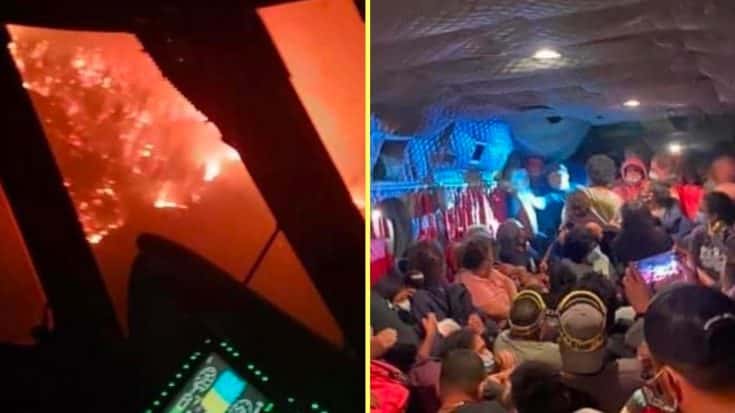 214 people were brought to safety this weekend, thanks to the California National Guard.

Fires have been burning all over California, spanning from Sacramento, all the way to Southern California’s El Dorado Fire, which was started from a gender reveal party.

On Saturday (Sept. 5), the Creek Fire in Central California began to get out of control and trapped over 200 people who were camping in the Sierra National Forest.

According to JRDQTV, CalFire was alerted about these people, who were “entirely encircled in fire,” but were unable to get to them. Instead, California’s National Guard flew two helicopters, a CH-47 Chinook and a UH-60 Black Hawk, in the dark of the night and the smoke.

“When we arrived at the fire’s edge and we first we made a decision to enter in — that was a crew decision,” said Joseph Rosamond, California National Guard Chinook pilot Chief Warrant Officer 5.

Night vision goggles helped the pilots steer along with the ironic help of the embers and flames.

The Chinook can carry about 40 people and the Black Hawk can hold 12, but as they touched down, they realized so many more people needed help. They loaded as many people as they could in both aircrafts, some of which had “severe burns.”

“We were quickly running out of time, and with the severity of some of the injuries, they were running out of time as well,” Rosamond said. “We decided then to pack as many people in as we could do. At that point our performance limitations were very, very close to the maximum capabilities of the aircraft.”

The crew made the decision to go back for more people two more times to rescue a total of 214 people, with at least two people deciding to stay with their motorhomes.

Rosamund said, “We just reevaluated it, communicated between the two aircraft both internally with the crew — ‘Do we have another turn? Can we get in here again? And just keep going until we ran out of people or we ran out of visibility to come back.”

It was quite possibly the most dangerous flying this crew had ever done and they all had a chance to stop the mission because of how risky it was, but none did. Those 214 people are safe because of them.