By Manly Bryant on July 8, 2020
Advertisement 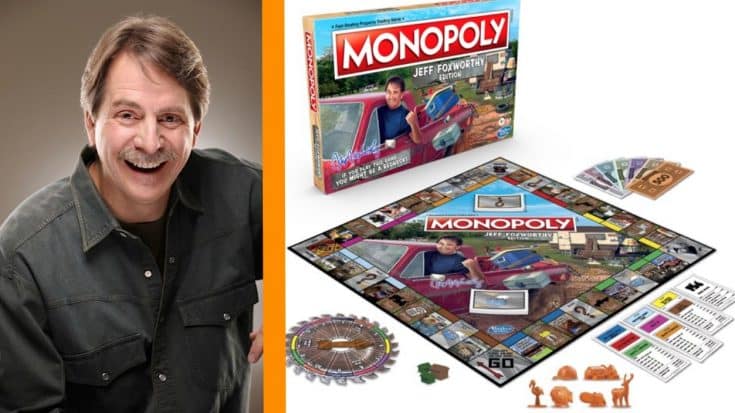 On July 1st, 2020, Walmart.com exclusively released a Jeff Foxworthy themed Monopoly board game that only costs $20 and is loaded with hilarious redneck jokes.

Players move around the board with tokens just like in Monopoly except these tokens are a trucker hat, a deer, a broke-down car, a lawn ornament, a chainsaw, and a mounted bass fish.

Instead of players using dice to decided how many spaces to move during their turns, they spin a rusty saw blade-shaped spinner that lands on one of 12 numbered slots.

With the spinner, there are also spots where if you land on them you will have to pay your hard-earned Monopoly cash or be forced to spin again.

Just like the original version of Monopoly, each player moves around the board and when they land on a property they have a chance to purchase it. However, what’s different is the properties in this game are honky tonks, fishing bait shops, diners, flea markets, liquor stores, and junkyards.

You can buy trailers and cabins for each one of your properties to make it more valuable just like the hotels did in the original game. Instead of railroads, you ride a lawnmower, fishing boat, or a pickup truck.

As far as the Community Chest or Chance card goes, there’s a similar version of it where instead of paying doctor’s fees or engaging in stock trades, you are battling over stuff like whose mullet won first place in a contest at the county fair. It’s the perfect game for a fun night. You can learn more about it and/or purchase it here.

I am so excited that Jeff Foxworthy Edition Monopoly is finally here! https://bit.ly/2YNhd5h