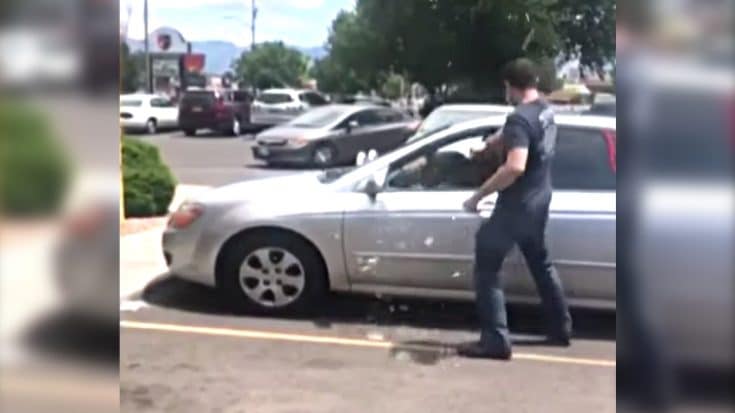 A New Mexico man, Gerasimos Klonis, and his girlfriend, were leaving a restaurant in Albuquerque when they heard the sounds of a struggling dog. The dog was sniffling and scratching, working to get its face to fit through a window that was cracked open only two inches in the hot Southwestern sun.

Klonis had to make a decision – and he had to make one fast. He called 911 and waited twenty minutes, but help did not arrive. He knew he had to make the call, and he asked his girlfriend to record him as he smashed the window with a crowbar.

The dog was safe, and happily drank water from a bottle provided by Klonis as they relaxed in the shade. The dog’s owner came out of a nearby business and said that they were unsure if their dog would be allowed in the establishment they were patronizing – even though the dog was wearing a service vest.

Klonis is being heralded as a hero, while the dog’s owner was charged with animal cruelty. In New Mexico, laws protect good samaritans who damage cars to save animals.