By Miranda Raye on November 8, 2021
Advertisement 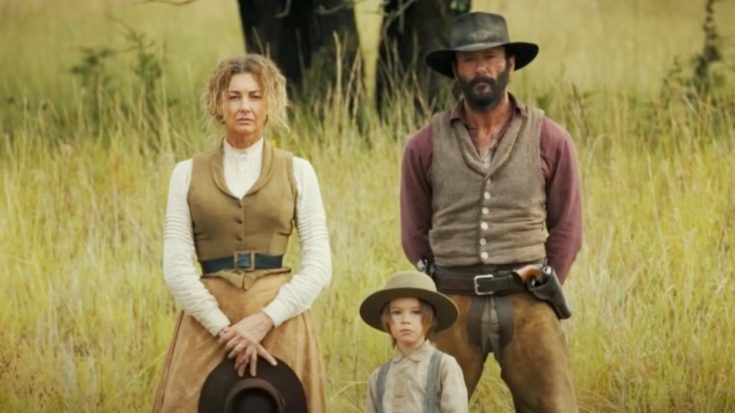 Back in August, we learned that country music power couple Tim McGraw and Faith Hill had been cast as James and Margaret Dutton in the new Yellowstone prequel series, 1883. The characters Tim and Faith play are the patriarch and the matriarch of Yellowstone’s Dutton family, and are John Dutton’s grandparents.

1883 will follow James and Margaret’s journey from Texas to Montana. They’ll be escorted by Shea Brennan, a wagon master and war veteran suffering from a great loss. Shea is portrayed by the legendary actor Sam Elliott.

As the months have passed, we’ve seen a few photos of Tim and Sam dressed in costume while working on set.

The premiere of Yellowstone on Sunday also featured a flashback to the 1800s when the Duttons had already arrived in Montana. https://t.co/I1tOXN2Koy

But we didn’t see a photo of Faith in character until EW shared an exclusive snapshot of her on November 5.

The photo shows Faith in front of a covered wagon while wearing traveling clothes. She looks determined and strong, like a woman who is ready to conquer whatever the frontier has to throw at her. You can see that photo here.

“To see my beautiful wife on horseback…and having dirt all over her face, I just sit in awe. She’s a strong woman, anyway,” Tim told EW about watching Faith act in 1883.

Fans finally got the chance to see Faith in action as Margaret when the first teaser trailer for 1883 was released during the Yellowstone Season 4 premiere on Sunday (November 7).

The dramatic clip makes it clear the Duttons’ road to Montana won’t be an easy one. We see them face some serious hardships along the way, including the loss of someone in their travel party (perhaps a family member).

This trailer also offers a look at Shea’s dark past, and shows how that has shaped him in the present. The whole thing is narrated by the character Elsa Dutton, who is James and Margaret’s teenage daughter.

Tim commented on the trailer after it was released, saying, “The story of the Duttons begins here.” Faith also had something to say, writing, “We are in the land of no mercy now.”

You can watch Tim and Faith in the new teaser trailer for 1883 below. The series premieres on December 19 on Paramount+, and we can’t wait to see it!