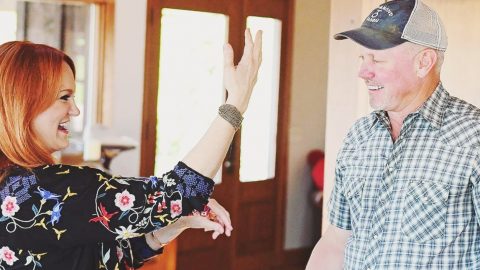 On March 10, “Pioneer Woman” Ree Drummond‘s husband, Ladd, and nephew, Caleb, were involved in a bad accident. The two of them were working to put out a fire on the Drummond family’s Oklahoma ranch when their trucks collided head-on.

Caleb was in critical condition following the crash. Ladd refused treatment at the scene and drove himself to the hospital, where he learned he had broken his neck in two places.

“…evidently one of the two fractures was very close to being catastrophic,” Ree wrote in an update on her blog five days after the accident.

Ladd underwent surgery and was told to wear a neck brace for the next several weeks. As for Caleb, he suffered some broken ribs, a concussion, and other injuries. Both Ladd and Caleb have been released from the hospital and have been recovering at home.

Ree has occasionally kept her fans updated on how Ladd and Caleb are doing in the aftermath of the accident. On March 28, she shared a short update on Ladd specifically, saying, “Ladd is doing really great.”

On March 31, Ree and Ladd’s daughter, Alex, and son, Todd, spoke about their dad and cousin’s recovery in a video on The Pioneer Woman Magazine’s Instagram.

“He’s doing a lot better,” Alex said about her father. “He’s recovering and he’s even starting to get back into ranch work.” She also said Ladd has limited mobility at the moment but “he’s still able to hang.”

Todd spoke about how Caleb is, saying his cousin is “…doing good.” He said Caleb is “...pretty much all healed up and back to his normal life.”

The Pioneer Woman Magazine‘s Instagram shared another update on Ladd and Caleb on Thursday (April 8). Although the update was short, it was welcomed by Ree’s followers.

Alongside a photo of Ladd riding a horse, the caption read:

“Ladd and Caleb are healing up after their accident on the ranch. (And the Drummond family is so grateful for all of your kind words!).“

We’re so relieved to hear that Ladd and Caleb are doing well!