By Manly Bryant on November 15, 2018
Advertisement 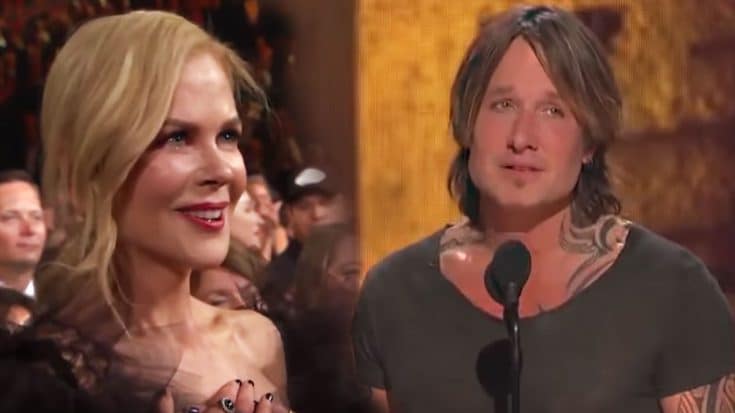 It was an emotional evening for the talented Keith Urban as he took home the award for Entertainer of the Year. His competitors for the big title were fellow buddies Jason Aldean, Luke Bryan, Chris Stapleton, and Kenny Chesney. With such a genuine reaction, it was clear Urban couldn’t have been a better pick. As the announcers said Urban’s name, a look of pure shock went over his face, as well as his wife’s, Nicole Kidman.

As teary-eyed Urban walked up on stage to accept his award, tears also flooded Kidman’s eyes as she beamed with pride for her husband. As he began his speech, it was so thoughtful and pure. He started off by thanking Kidman, his “baby girl” and then his two daughters who support him through everything he does.

Awww Nicole Kidman and @KeithUrban crying as he wins entertainer of the year at the #cmas #CMAAawards is everything! #CoupleGoals pic.twitter.com/I19Q7qhkTr

He continued, saying he had an endless array of people to thank, especially his fans. One person he mentioned he wished was there to see his big win was his late father.

“I wish my dad was alive to see this, but I think he’s watching over me tonight. I just feel very very blessed. I am very grateful that I get to do what I do. God bless country music.”

He took to Instagram later that night to thank all his fans with an incredibly sweet video.

Shortly after his win, Kidman posted her own Instagram revealing her thoughts on the big night.

“What a night! We were so shocked. Congratulations baby.”

From the tears to the hugs and the love, it’s safe to say these two are each other’s biggest fans!

What a night! We were so shocked. Congratulations baby. #CMAAwards ??