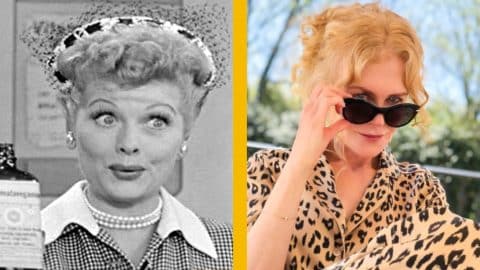 It recently leaked that Nicole Kidman was in talks to play Lucille Ball in an upcoming biopic, and the internet had mixed reactions about the casting choice.

Kidman is preparing to dive into the role of Ball in the movie Being the Ricardos. The Big Little Lies actress will star opposite Javier Bardem, who will portray Desi Arnaz. The film follows former real-life couple Ball and Arnaz through a week of production shooting the hit series I Love Lucy.

“I was like, ‘Yeah, I would love to give it a go,’” Kidman recalled in an interview with Variety. “With Aaron’s words and his direction and Javier … that’s kind of a wonderful prospect to, you know. But yikes, off we go. Give it a go. Try my best—see if I can do it.”

Kidman also admitted that she has recently started watching a lot of I Love Lucy reruns. In the interview, the actress revealed:

“I love Lucille, having looked now and delved into her. She’s an amazing woman. I’m very excited for people to see what Aaron found out about her and the way he’s interpreted Desi and Lucy and the way that it’s so rich. I didn’t know any of this.”

Ball and Arnaz’s daughter, Lucie, an executive producer for the biopic, spoke out in a message to fans due to fan backlash over the final casting decision. In a Facebook video, Lucie explained that Kidman would play her mother, Ball, and not necessarily Lucy Ricardo. Lucie also made it very clear that casting decisions were final.

Relive some of the funniest moments from I Love Lucy in the video below.