By Miranda Raye on January 10, 2019
Advertisement 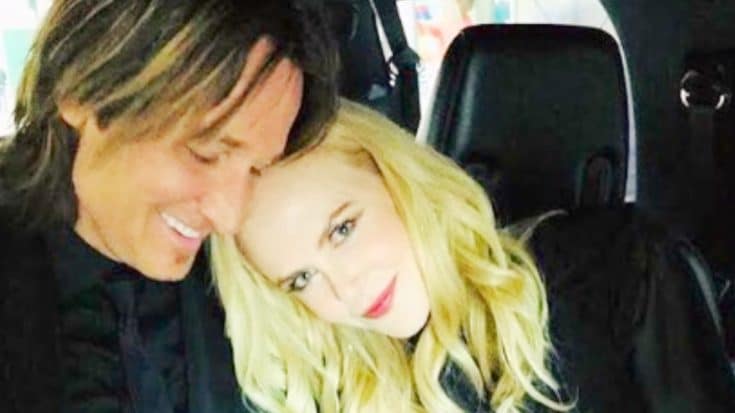 Keith Urban and Nicole Kidman are consistently named as one of the cutest couples at any red carpet they walk, with fans and fellow celebrities proclaiming they are the definition of “couple goals.”

It’s easy to see why people feel that way about the duo. They shower one another with endless affection, and always have each other’s backs.

While it seems like Keith and Nicole have been together forever, it hasn’t been for as long as you may think. The two first met at an event in Los Angles in 2005, and a romance soon blossomed.

How She Knew Keith Was For Her

It only took six months for Nicole to know that Keith was “the one” she had been searching for her whole life. She described the moment she came to this realization during an interview with People:

“It was my [38th] birthday, and he stood outside with gardenias at 5 a.m. on my stoop in New York,” she said. She went on to add that her thoughts at the time were, “That is when I went, ‘This is the man I hope I get to marry.'”

Her hopes became reality when the couple tied the knot on June 25 in Australia. While they faced some hardships early on, those struggles only made their relationship stronger.

“Real love happens not when everything is going well but when things are going badly,” Nicole told People.

Such a fun time at the #ACMawards last night with my love, @KeithUrban. Congratulations on your win and an amazing performance. xx

Two years after marrying, the couple welcomed their first child together, a little girl they named Sunday Rose. Their family earned another addition two years later, when second daughter Faith Margaret was born.

It doesn’t take a rocket scientist to figure out that Keith and Nicole are smitten with their two daughters, and love them unconditionally. The couple has famously tried to shield their girls from the spotlight, rarely sharing videos or photos of them.

However, as the girls have grown, the duo has been a little more willing to share their sweet girls with the world.

With a beautiful family and a love that many others envy, you’d think that Keith and Nicole couldn’t want anything more out of their marriage.

And although they are perfectly happy with the way things turned out, Nicole shared with People that she does sometimes wish that one thing about their relationship was different.

The Dream That Never Came True

She explained that she had always dreamed of having a large family, but that her age kind of held her back from making that dream come true. She was 38 when she met Keith, and although she was able to carry Sunday on her own in her 40s, Faith had to be born through a surrogate.

Nicole says that she can’t help but wonder just how many kids she and Keith would have welcomed into the world if they had met at a much earlier time in their lives:

“We go, ‘Oh gosh, I wonder if we met when we were 25, then we could’ve had 10 of them!’ But Keith says, ‘Stop the wanting mind.’ It’s far better to be completely in love and satiated with what you’ve been given, what we’ve been given.”

That sentiment is something that Nicole previously expressed in an interview with BBC in 2017. While she wouldn’t change anything about her life or relationship, she knows how much she would have loved having a larger family:

“I hate to use the word ‘regret,’ because I have no regrets in terms of, ‘I am so blessed.’ But would I enjoy giving to more young people? Yeah,” she said.

Ten years ago today our little girl came into the world ? You are our joy Sunday Rose. We love you, Happy Birthday ?❤️

We can’t blame Nicole for wanting to have more children with Keith…Sunday and Faith seem like such sweethearts! Tune in below to watch the adorable sister duo join their mother and father onstage during Keith’s 2017 New Year’s Eve tribute performance to artists lost that year.

They even start dancing with their mom when Keith plays Tom Petty‘s ‘Free Fallin’!”