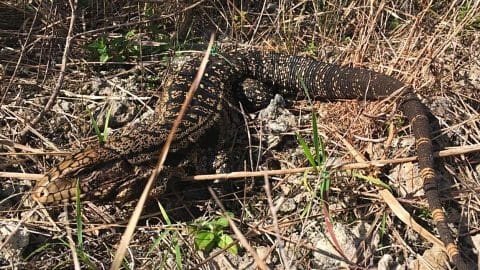 Look out, Georgia residents, there’s a new lizard in town, and they’re trying to take over.

The South American lizard known as tegus was recently spotted in Tattnall County, and officials are asking for Georgia residents’ help in getting the lizard out of the state for good. Officials state that the lizards hail from Argentina. They likely began to invade Georgia after they were released or escaped from their owner’s care, and began to breed.

While the lizards are not a threat to humans or household pets, they tend to eat anything else in their path.

“They eat just about anything they want, plant and animal matter,” John Jensen of the Georgia Department of Natural Resources said regarding the tegus.

How to spot a tegus? Keep an eye out for a creature that looks like a small alligator.

“Many of the public that encounter these often report them, thinking that they look like a baby alligator well away from the water,” said Jensen. If possible, Georgia residents are asked to safely and humanely trap and exterminate the lizard.

A post shared by SilverLake Reptiles (@silverlakereptiles) on Aug 1, 2020 at 9:57am PDT

While the tegus problem is just beginning to take root in Georgia, wildlife experts warn that it can get out of control fast. A tegus can live up to 20 years and can lay 35 eggs each year.