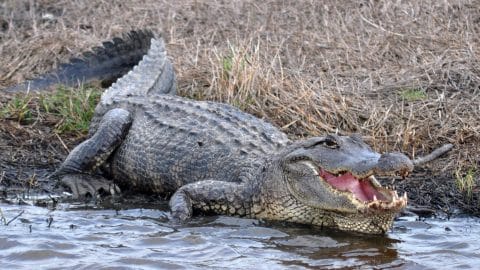 St. Tammany Parish Sheriff’s Office in Slidell, Lousiana released a statement saying that they have captured and killed a 12ft alligator that is believed to have eaten 71-year-old Timothy Satterlee Sr.

“I’m pretty confident we have correctly identified who is in the alligator. Now it’s just a matter of being more sure,” St. Tammany Parish coroner Dr. Charles Preston said, Nola reported.

Timothy was in his backyard checking on his shed after Hurricane Ida passed over when his wife heard a splash and what sounded like he fell in the water.

According to Capt. Lance Vitter, a Sheriff’s Office spokesperson, when she went to check on him, she saw that the massive alligator had her husband in its mouth and was doing the death-roll on him.

St. Tammany Parish Police Officers and Louisiana Wildlife and Fisheries agents scoured the marshes with cadaver dogs and he was never found. After days of searching, he was presumed dead.

Two weeks after the incident, deputies and wildlife agents spotted a large alligator via drone in the area where it took place and trapped it. The gator was measured to be 12 feet long and weighed 504 pounds.

“We had a lot of luck on our side,” Capt. Vitter said. “It was the first one they caught.”

When wildlife authorities cut open the gator to examine its insides, they found what was clearly human remains. St. Tammany Parish coroner said on Thursday that after extracting DNA samples, they are very confident it’s 71-year-old Timothy Satterlee Sr.

“For a criminal case, that wouldn’t be sufficient to make a positive identification. But at some point you just have to apply common sense,” the coroner said. “We had one reported person eaten by an alligator, one very large 500-pound alligator recovered with human remains in it and 11 points matched with his male relatives. So I felt that was enough.”

The family was notified and offered up objects like Timothy’s hairbrush, toothbrush, that had his DNA on it so that they could compare them to teeth and part of a jawbone that was recovered from the gator.

“It was really very challenging because much like someone who is severely burned, the DNA in the burned tissue is going to be completely destroyed. And unfortunately a lot of the tissue that had been inside of the alligator’s stomach was severely degraded,” the coroner said. “I’m comfortable saying the remains are that of Mr. Satterlee.”

Police investigators say that they believe the attack didn’t involve “any foul play whatsoever. It was just a tragic horrible accident.”