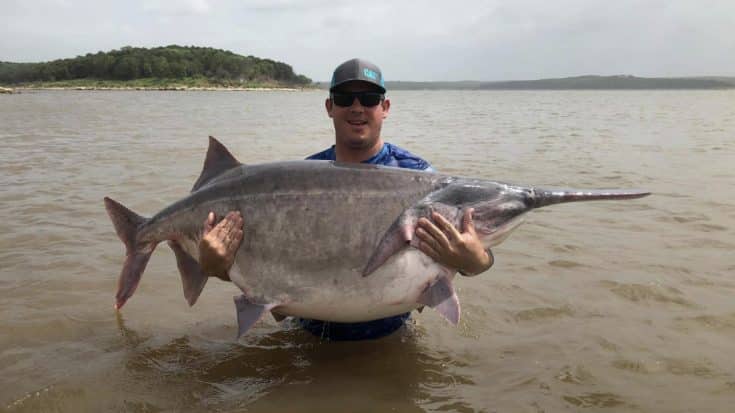 A spur-of-the-moment fishing trip with his wife turned into a record breaking day for one Oklahoma man. James and Caitlin Lukehart of Edmond hired a guide to help them find some paddlefish at Keystone Lake in Northeastern Oklahoma, but they never anticipated that the one James would reel in would possibly land him in the record books.

The Lukehart’s simply wanted to put a fish on the table for dinner, but got way more than they bargained for…in a good way. Caitlin was the first to catch a fish when landed an 82-pound paddlefish. They released it before James snagged a record-setting 146 pound, 11 ounce paddlefish. Caitlin captured the thrilling moment her husband reeled in the giant prehistoric fish.

“My wife filmed everything and I’m finally watching the video,” James told Tulsa World Sunday afternoon. “My facial expressions, and I don’t think I said anything too improper, it was just total excitement.”

The paddlefish was certified as Oklahoma’s newest rod-and-reel-state record by Paddlefish Research Center and Northeast Region Fisheries staff, the state wildlife department wrote. Lukehart’s new official Oklahoma state record beats the one set a month ago by his own guide, Jeremiah Mefford of Reel Time Guide Service. Mefford’s fish weighed 143 pounds and was 76-inches long compared to Lukehart’s nearly 147-pound catch with a length of 70.5 inches and a 45-inch girth.

Lukehart confirmed on Facebook that the catch also broke a world record previous held by a 144-pound fish caught in Kansas.

Anglers hoping to snag a world record paddlefish will be glad to know that Lukehart released the fish back into Keystone Lake so that someone else can relive the moment he experienced. It’s worth noting that James named the fish “Girth Brooks” before releasing it.

He also shared the exciting footage captured by his wife, including the moment the fish was weighed and he realized that he had caught a record-breaking fish. Check out the footage below!