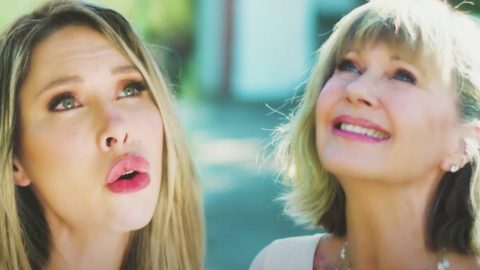 Olivia Newton-John is no stranger to collaborations. She’s performed with countless artists including John Denver, Barry Gibb, John Travolta, Kenny Loggins, and Marie Osmond, just to name a few. But there’s one duet partner she probably cherishes the most – her daughter, Chloe Lattanzi.

Lattanzi was born in 1986 to Newton-John and her first husband, actor Mark Lattanzi, and followed in her parents’ footsteps as a singer and actor. During her career, she has released a few singles, with her earliest being 2010’s “Wings and a Gun.”

Just last week, Lattanzi and her famous mom teamed up to release a moving song titled “Window In The Wall.”

“I played the song and I started crying. It was really emotional; the song really hit me in the gut,” Newton-John told TODAY’s Natalie Morales. “It was just a knowingness that I had to do this song and the first person I thought of was Chloe because it was about relationships, it was about forgiveness, compassion, seeing the other side, other people’s point of view, and still with love. And understanding and kindness.”

Of her mom choosing her as her duet partner, Lattanzi said, “I loved how moved my mom was, and the fact that she could’ve asked anyone to sing it with her and she asked me, that touched my heart more than you could ever know.”

This is not the first time the mother-daughter duo have collaborated. In 2015, they teamed up with DJ and producer Dave Audé for a dance track called “You Have To Believe.”

Newton-John and Lattanzi have also sung together live several times, with a fan-favorite performance being in 2003 when they sang “Over The Rainbow.”

Newton-John is currently battling cancer for the third time, which makes this duet even more emotional.

“What greater reason do you have to stay alive than to enjoy your children, and hopefully one day grandchildren,” she said. “So yeah, of course, she’s my reason to be.”

Watch the mother-daughter music video for “Window In The Wall” below.