One Dead After Canadian Air Force Jet Crashes Into House 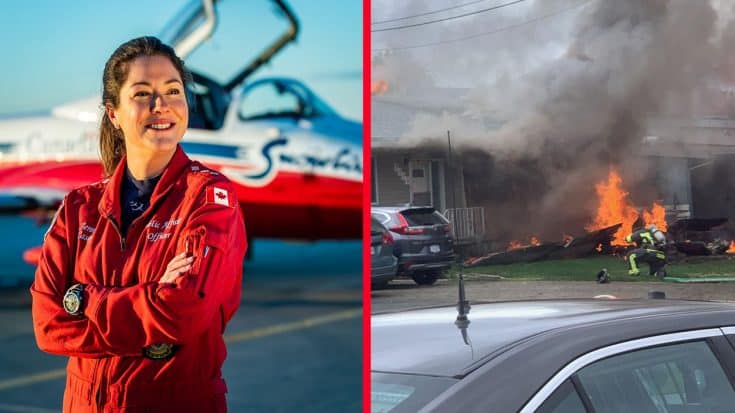 One crew member has died after a Canadian Air Force jet crashed into a house while paying tribute to the country’s frontline healthcare workers. The aircraft came down a few seconds after taking off from Kamloops Airport, in British Columbia, just before noon on Sunday.

The Snowbirds are a team of the Canadian Air Force that are similar to the U.S. Navy’s Blue Angels. They have currently been on a tour to salute Canadians doing their part to fight the spread of COVID-19 and to lift spirits all across their country.

It was confirmed that Capt. Jenn Casey, a public affairs officer with the Snowbirds, died in the crash.

The RCAF has suffered another tragic loss of a dedicated member of the RCAF team. We are deeply saddened and grieve alongside Jenn’s family and friends. Our thoughts are also with the loved ones of Captain MacDougall. We hope for a swift recovery from his injuries. – Comd RCAF pic.twitter.com/8U41bdVqcU

The pilot of the CT-114 Tutor aircraft, Capt. Richard MacDougall, sustained serious injuries in the crash, but they are non-life-threatening.

Here is Captain MacDougall with his plane @CFSnowbirds #CAF pic.twitter.com/xaSnOBruX4

Video footage shows the plane following another jet before it veered upward and circled the tarmac before going into a nosedive and crashing into a home. The couple that lived in the home are reportedly okay and neither were injured by the crash.

Nolyn McLeod lives across from the house where the plane landed and told CBC News,

“We saw the pilot eject like maybe two stories high, and then the plane with no pilot in it went right between me and my neighbors house. The house was all burnt and charred; the roof was caving in…It was pretty bad, the whole lawn was on fire.”

The cause of the crash remains unknown and is still under investigation.

Watch the incident in the video below.

A Canadian Forces Snowbirds flyover that was meant to boost spirits ended in tragedy when one of the jets crashed, killing the team’s public affairs officer, Captain Jennifer Casey. The pilot of the jet was hospitalized with a non-life threatening injury (warning: distressing) pic.twitter.com/2AG0Ma5bh1