One Of The “World’s Most Haunted Hotels”: San Antonio’s Emily Morgan Hotel 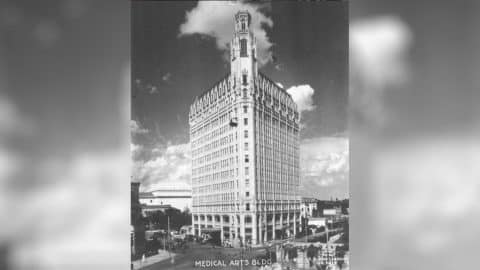 San Antonio, Texas, has a significant paranormal presence and is known as one of America’s most haunted cities. Founded in 1717, it’s also in the top 20 category for the oldest cities in the United States.

As the location of the infamous Battle of the Alamo, there have been countless ghost hunters who have visited the town.

Among the haunted buildings, one of the most prominent is the Emily Morgan Hotel. Countless visitors have witnessed paranormal events and activities throughout the building’s existence. In 2013, USA Today listed it as number 3 on the list of the 13 most haunted hotels in the world.

Housed in a historic neo-Gothic building with a reputation for paranormal activity, the 177-room boutique Emily Morgan Hotel has a prime downtown location across from the Alamo.

From 1924 to 1976, the building was used as a medical facility. The building housed doctors’ offices, rooms for patients, a morgue, and a psychiatric ward. An interesting architectural feature of the building is the array of gargoyles that line the building, each portraying a medical ailment.

Emily Morgan Hotel built in 1924 and located next to the Alamo in San Antonio. It is rumored to be one of the most haunted hotels, not just in Texas, but the world. It was initially built as a Medical Arts Building housing several doctor’s offices and a surgical hospital. I’ve read several articles claiming the lobby or basement served as a morgue and the top floor a crematorium. It has been visited by several paranormal investigators. . . . . . . . #hauntedplaces #hauntedhotels #historicsanantonio #sanantoniotexas #hauntedtexas #hauntedhistory #emilymorganhotel #supernatural

In 1976 the building was converted into modern office space, but was transformed into a hotel less than 10 years later. The top floor is technically the thirteenth floor but the hotel changed it to be the fourteenth floor due to superstitions.

Reports of unexplained noises, apparitions, and the feeling of being touched are pretty frequent.  The restaurant and bar inside the hotel offers a psychic happy hour with palm readings on Thursday nights.

Watch the video below to see one guest’s overnight experience at the Emily Morgan Hotel.