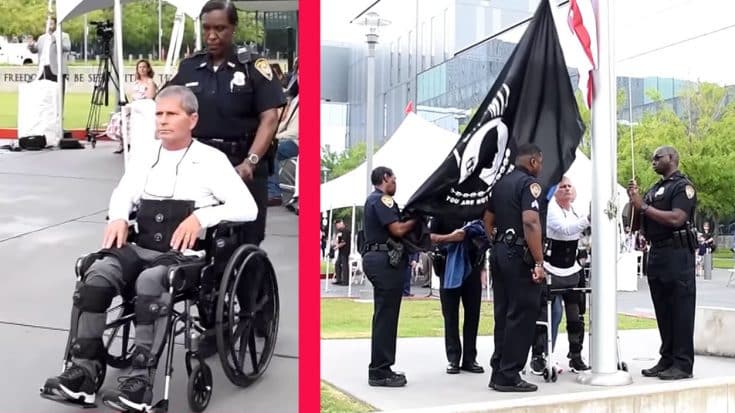 Buddy Laddin is a United States Army veteran who is paralyzed from the waist down due to a spinal injury. In a powerful and heartwarming moment during a 4th of July flag ceremony, Laddin stood up to raise the American flag.

“I was working construction, we was on the scaffold 36 feet up in the air, and the scaffolding collapsed. When it collapsed, they said I hit a forklift on the way down,” Laddin told ABC’s WGNO.

Laddin broke several bones and his spinal cord exploded. He was in a coma for two weeks, and when he woke up, he was paralyzed from the waist down.

After the accident, Laddin was surprised by the VA when they offered him physical therapy. He was given an Indego Therapy Exoskeleton which is a robotic technology that helps those with a spinal cord injury restore their ability to stand up and walk.

The exoskeleton was donated to the VA by the Soldier Strong organization, and it’s estimated to be worth more than $125,000. The exoskeleton weighs just 29 pounds and is customized for Laddin’s body. The robotic machine is powered by a lithium battery, that lasts about six hours.

In front of a crowd of onlookers, veterans, police officers, and news crews, Laddin rose from his wheelchair and hoisted the American flag with the assistance of a couple of police officers.