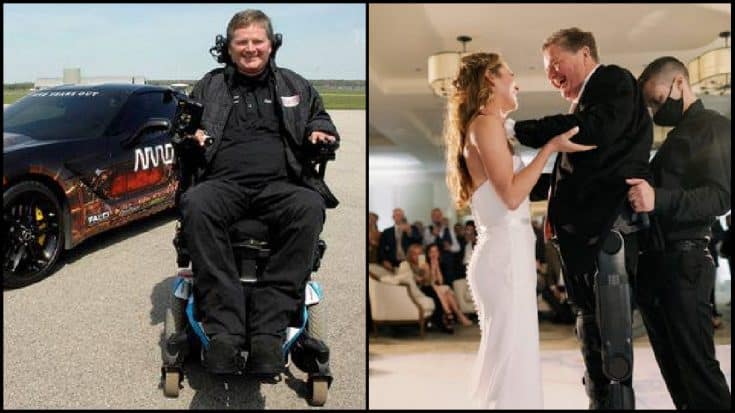 The daughter of IndyCar team owner Sam Schmidt got a wedding day surprise she had dreamt of for years….a father-daughter dance.

The dance was a surprise to the bride, Savannah Boehrer, who was just two-and-a-half when her dad was paralyzed while test driving a race car in January 2000. Schmidt was driving his Treadway Racing G Force-Aurora at Walt Disney World Speedway when he spun and hit the retaining wall.

The driver “blew apart his C3 and C4 vertebrae and wasn’t breathing for almost four minutes,” according to USA Today. Thankfully, a safety crew was there and pulled him out, resuscitated him before he was transported by helicopter to an Orlando hospital.

Schmidt’s wife, Sheila, was told that he likely wouldn’t live another five years and that he would remain on a ventilator. Schmidt, who is now 56-years-old, defied the odds in numerous ways. Not only did he get off the ventilator, but he founded Schmidt Peterson Motorsports, now known as Arrow McLaren SP. And, he started Conquer Paralysis Now, a foundation that “funds scientific research, medical treatment, rehabilitation and technological advances that lead us toward a cure.”

He knew the day would come that his daughter would marry and he dreamed of giving her a father-daughter dance that she would remember. In 2013, Schmidt started working toward that goal by teaming up with engineers at Arrow Electronics who had modified a Corvette to allow Schmidt to drive using only the motion of his head. This inspired Schmidt to work toward something that would allow him to walk again.

In 2019, Schmidt “had a feeling” that his daughter’s boyfriend of two years was ready to propose. So, he went to Arrow and together they got moving to create an exoskeleton that would allow Schmidt to walk.

“Four engineers were assigned solely to design an exoskeleton that would allow Schmidt to walk,” USA Today reports.  “They took an existing exoskeleton product that was tried and proven then adapted it, added technology and customizing it for Schmidt’s level of injury, which is much higher than most exoskeletons are designed for.”

While Arrow worked on the exoskeleton, Schmidt worked 5 days a week to lose weight and to strengthen muscles that had atrophied from being immobile for more than two decades.

The hard work paid off when Schmidt saw her dad standing and walking for the first time in 21 years.

“And we walked in together and that was the first time she had seen me standing and walking at all,” he said. “So to say there wasn’t a dry eye in the room was pretty much an understatement.”

Schmidt swayed with his daughter to “Daddy Dance With Me” by Krystal Keith while the guests cried and celebrated the special moment.

“I always dreamed this day would come,” said Savannah. “So, for this one dance, it was incredible just to be his daughter, and for him just to be my dad. For us to get to have the daddy-daughter dance that every little girl dreams of. For me to actually look up at him, to hold his hands and just dance.”

As memorable as the father-daughter dance was to Savannah, there was one moment that was even more special to the new bride.

“When my mom came up to have the next dance with him, that was when the emotion crashed over the room,” Boehrer said of her parents’ dance to “Stand By Me.” “It had been over 21 years since my mom had been able to experience standing and dancing with my dad. In that moment, even just for a dance, she was able to get back. (It was) the most special moment I have ever witnessed.”

Take a behind-the-scenes look at the exoskeleton built for Sam Schmidt in the video below.