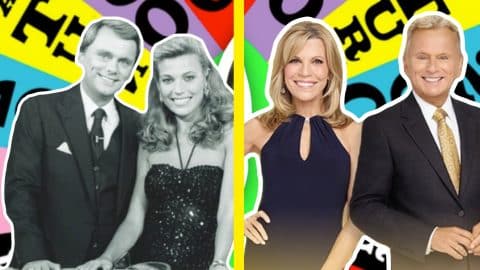 The 74-year-old host spoke about his future on the show after becoming the longest-running game show host in television history…and it may affect his beloved colleague, too.

📺DEBUT: The syndicated version of ‘Wheel of Fortune’ with Pat Sajak and Vanna White premiered 38 years ago, September 19, 1983 pic.twitter.com/PRVIHZEbct

Pat Sajak and Vanna White have become gameshow and TV icons from their nearly four-decade run on Wheel of Fortune. But, admittedly, that time is coming to an end – Sajak says.

Speaking with Entertainment Tonight’s Kevin Frazier just before the 2021 premiere of Celebrity Wheel of Fortune, Sajak and White took a stroll down memory lane…and looked toward the future and if that will include more time on the show.

The nightly version of the game show "Wheel of Fortune" debuted today in 1983. The popular show has aired more than 7,000 episodes and counting! #80s #80stv pic.twitter.com/MrDookTwrq

74-year-old Pat Sajak and 64-year-old Vanna White have been the mainstays of Wheel of Fortune since its debut in 1983 – even when Sajak was hospitalized in 2019, White continued on with the show and filled in for him as host! They really have been a dynamic duo!

Pat Sajak had to spend time in the hospital for emergency surgery so Vanna White is currently hosting Wheel of Fortune while Minnie Mouse is the one filling in for Vanna's usual job by turning the letters on the board pic.twitter.com/4vKnMsu0I9

“We’ve been together for like 38 years and he’s like my brother,” White told ET. “He’s funny. I mean, we could finish each other’s sentences if we wanted to. We know each other that well.”

Though the duo recently signed a new contract to stay on until 2024 – Sajak says that they are “closer” to the end.

“We’re certainly closer to the end than the beginning…I’d like to leave before people tune in and look at me and say, ‘Ooh, what happened to him?'”

“Probably, yes,” she responded with a smile.

With a contract that will see them complete 41 years on the show – what does he mean by “closer to the end?” Will they even renew their contract?

Check out this video of Sajak’s history on Wheel of Fortune below and let us know what you think in the comments!