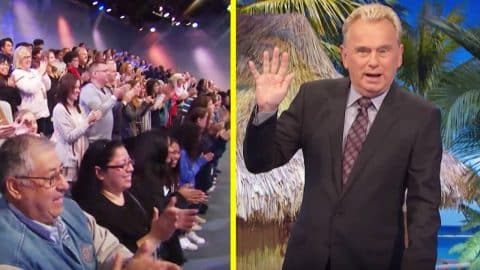 In November, Wheel Of Fortune host Pat Sajak had emergency surgery due to a blocked intestine. The procedure, and his recovery, forced him to miss three weeks of taping the show. Vanna White stepped in as host during his absence.

The official Wheel Of Fortune social media accounts confirmed the news, as well as revealing that the surgery went well and Sajak was already recovering and resting at home.

The Wheel of Fortune taping on Thursday was canceled because host Pat Sajak underwent successful emergency surgery to correct a blocked intestine. He is resting comfortably and looking forward to getting back to work. Taping resumed today as scheduled and Vanna White has stepped in as host.

Special guests helped with letter turning, including Mickey Mouse, Minnie Mouse, Donald Duck, Goofy, and Pluto. Good thing it was Disney week or that would be a little weird! Sajak’s daughter Maggie also stepped in as a letter turner.

When Maggie’s episode aired, Pat was already back taping episodes and his first one aired on Monday night (Jan 13). When Pat and Vanna were announced and walked out from backstage, the entire audience gave him a standing ovation for his return to the show.

Ever so modest, the longtime host said standing ovations always made him nervous and he explained why a bit later.

Once he took his post up with the contestants next to the wheel, he said, “I don’t know whether you’re happy to see me or if you’re leaving because Vanna’s not hosting.”

He was assured that the standing ovation was indeed for him and he was so grateful for the warm welcome back! Watch the moment below.