Persistent Rooster Gets Hired At Auto Shop – Photos Are Hilarious 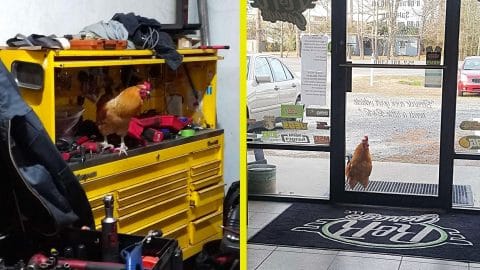 It was a beautiful summer day at the R&R Garage located in Powells Point, North Carolina. All the employees were just showing up to start the work day when out of nowhere a big red rooster randomly walks up to the door, wanting to get in as if he was part of the team.

The crew, entertained by the confidence of the rooster, thought maybe someone had abandoned him, so they let him stick around. He was fed leftovers from the fridge which he happily ate, and then walked around the shop just following everybody.

The guys finished work and left for a long weekend. When they returned they were surprised to see he was still there. So they named him Earl and he’s been showing up to work ever since. Every day, Earl shows up to the shop as soon as the first employee gets there.

“He comes running when the first guy comes in to open up for the day,” Joe Gallo, co-owner of R & R Garage, said. “He gets his cup of scratch, then wanders the shop looking for any bugs that may be around. He gets up under all the toolboxes and workbenches looking for spiders and anything else he can find.”

After Earl eats his morning meal and pecks around the shop for some bugs to eat, they say he likes to just follow the crew around making himself at home.

“He will come up in the shop and usually lay down and sleep under the car you’re working on or in a corner,” Gallo said. “He doesn’t care about loud noises or people walking by. He will even sleep in front of the office door and we’ve tripped over him a few times.”

Earl thinks he’s one of the employees now and really doesn’t understand that most of the time he’s actually in the way. However, the workers don’t mind, they like the company of their red rooster friend. Everyone in the local community who comes to get their car worked on knows about Earl now. They say he’s become the town’s celebrity.

“We can’t believe the attention Earl is getting … it’s the town gossip now,” Gallo said. “We do have customers that bring other friends or family to see Earl when they come pick up their vehicles.”

No one knows why Earl has chosen to stay at the shop but everyone’s glad he does. He’s definitely made a big impression and has officially become part of the R&R Garage family.