Pet Rabbit Is Trained To Fetch His Owner A Beer 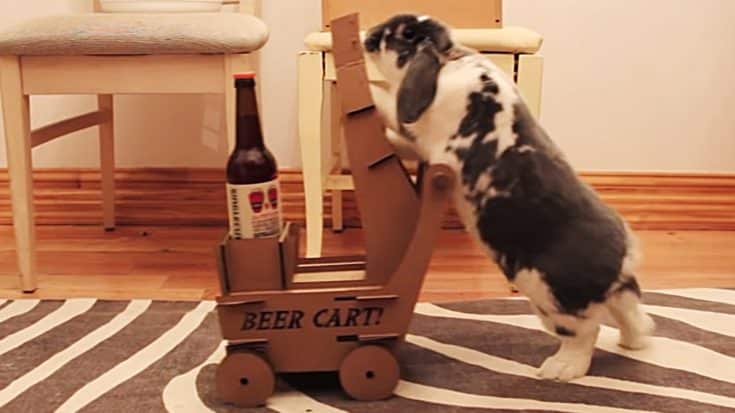 Somehow this YouTuber got his pet rabbit named Wallace to bring him a beer using a cutout cardboard box cart that was specially built for the rabbit to deliver beverages.

“I have been collaborating for the past year with my girlfriend’s pet rabbit to create performance art and “happenings” that capture this rabbit’s capabilities and worldly passions.”

Not sure what gave him the idea to do this or why he even thought it would work but with a little motivation it appears he successfully did it.

The video starts out with the pet owner looking at his empty bottle of beer and then looking over to Wallace and saying “Wallace, grab me a beer please.” The rabbit just sitting still on the floor hops over to the cart with a beer in it and begins to push the cart.

How He Got The Rabbit To Do It

The cart appears to have a treat attached to the top of it and the way the cart is designed when the rabbit tries to eat the treat it pushes the cart. Genius and adorable to witness.

“In a million years, neither Wallace nor I would have guessed that our creative endeavors would take this route but after such a long journey we arrive at this significant moment.”

We’ve seen dogs and pigs grab beverages for owners but never before have we seen a rabbit do it. Apparently, they are smarter than many people realize. You’ve got to see this video for yourself, check it out below!