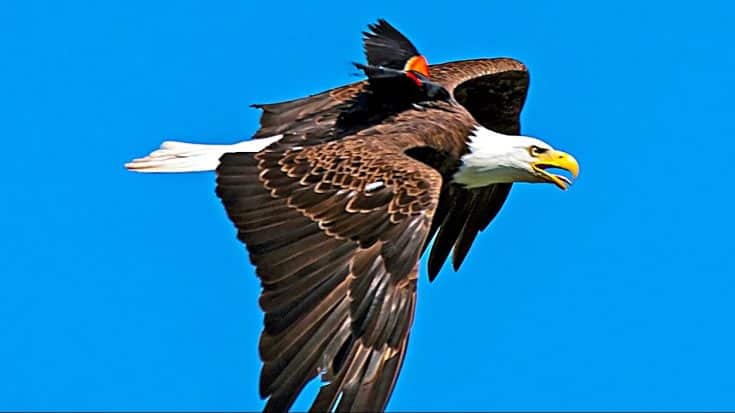 Jason McCarty, a professional nature photographer, caught one of the coolest images he’s ever captured in his life. It was an eagle getting attacked by a red-winged blackbird!

Got The Confrontation On Camera

Apparently, the eagle named Janice was out flying over a lake in Michigan when she decided to swoop down and dip her talons into the water for a tasty fish swimming near the surface. Jason said she was on a mission to bring back food to her recently hatched eaglets, Gary and Leonard, when Jason got the confrontation on camera.

Jason wrote on Facebook: “Never in my life thought I would ever get a chance to photograph this again. And to have the lighting just right. Miss Janice was in full flight when this happened. The Red Wing Blackbird is perched in the middle of her back. WOW is all I can say.”

Piggyback ride anyone? Eagle Uber?Never in my life thought I would ever get a chance to photograph this again. And to…

She Flew A Little Bit Too Close To Its Territory

The report says that Janice was headed back to her nest but flew a little bit too close to the red-winged blackbird’s territory and that’s all it took for the feisty little bird to launch out on the attack. It flew right up on Janice and dug its claws into her back feathers.

The battle didn’t last long because the powerful eagle simply shrugged the blackbird off its shoulders and continued on to its nest. Though the fact it all got caught on camera was truly a rarity. Jason posted the picture to Facebook, and it wasn’t long before news sources found out about it and made the picture go viral.

Only pictures were taken, so there is no video of the rare moment on video. However, we did find this video below showing a red-winged blackbird attacking an eagle. Enjoy!