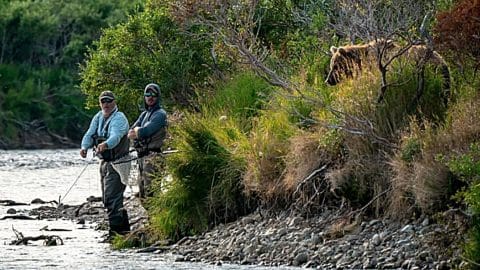 Bear Sneaks Up On Fishermen

Robert Hawthorne, a professional wildlife photographer, was sitting in the bush taking pictures like he normally does when he pointed his camera at some men fishing, only to see a gigantic grizzly bear sitting behind them.

A mother of 3 spring cubs has to keep up quite a diet to stay healthy. Salmon fishing keeps them busy for 10+ hours a day, only followed by an all night wild blueberry feast in the tundra. They can consume a staggering 100,000 calories per day, the equivalent of 1282 boiled eggs! That's roughly 40 salmon coming in at about 100 lbs of food!

The men were completely oblivious to the bear who crept up on them as they fished in a remote creek located in Katmai National Park, Alaska. Out of habit, Robert took the picture as soon as he saw the bear but then quickly put down his camera to yell at the men trying to warn them.

The two unknown men never clearly heard what Robert was trying to tell them because he was too far away. They just look towards him for a few seconds and continued fishing. Meanwhile the bear sat still like a ninja in the bushes waiting for a salmon.

“They were oblivious to the bear behind them. The bear truly was not interested in the fishermen, although he may have been interested to see if they had caught a fish for stealing.” Robert said.

This very well may be my favorite photo from the summer. These two fishermen were oblivious to say the least. There is no Photoshop here, just what makes Alaska so wild! Feel free to share but please, please just give credit. #flyfishing #bearencounter #brownbear #lookbehindyou #shotoftheday #wildlife #sony #a9

Robert’s been a wildlife photographer since 2015 and was guiding a photography tour when he snapped the terrifying picture. According to his story, once the two men realized the bear was behind them they were startled at first but when they noticed the bear wasn’t threating them they quickly resumed fishing.

“This is more of a common occurrence than you think. The bears walk up and down the banks looking to find sockeye salmon to catch. It can happen several times a day that you have a bear walk close behind you.” Robert said.

Even though Robert is only 21 years old he’s built up an impressive collection of photos of bears, eagles, birds, bison, mountain lions and eye-popping landscapes that you can view on his website or Instagram. No video was ever taken of the incident, however, below is a video of a guy fishing near a creak when a grizzly bear walked up and sat down beside him.