Photos Proving How Past ‘Voice’ Contestants Have Changed Since The Show

By Miranda Raye on February 16, 2019
Advertisement 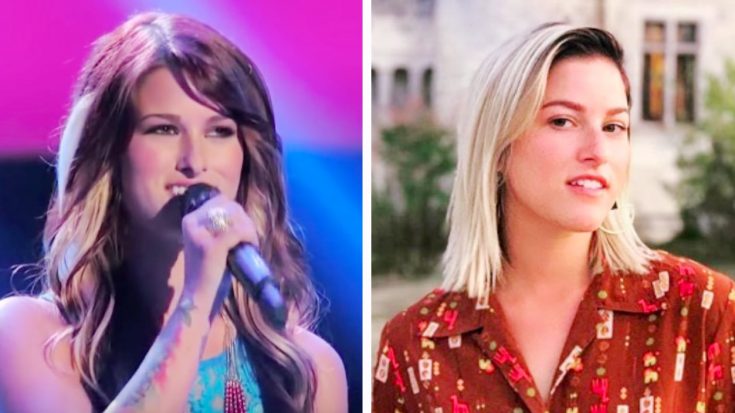 The Voice Is Older Than You Think

It may be hard to believe, but the first episode of The Voice debuted in April 2011. With two seasons per year over those years, viewers have been introduced to hundreds of talented singers from all over the nation.

While singers of all genres have flourished on the show, viewers always seem to find themselves enchanted by those who identify themselves as country artists.

Many country contestants have gone on to win the show, including Season 15’s winner, Chevel Shepherd.

How Have The Contestants Changed?

If you’ve been tuning in to The Voice since the beginning, we’re sure you have some favorite country contestants from past seasons. Ever wonder what they’ve been up to or what they look like now? Well you’re in luck, because that’s what this list is all about!

Join us as we show you how several of The Voice‘s leading country stars have changed through the years. Since some of them were young when they competed, you’ll see how much they’ve grown up since they were on the show. We’ll include artists you may still see in the spotlight from time to time, as well as others you haven’t heard from in a while!

Go ahead and take a look at the pictures we gathered below.

RaeLynn was only 17 years old when she stepped on the Voice stage for her blind audition in Season 2. She sang the Pistol Annies‘ “Hell on Heels,” which perked the interest of coaches Adam Levine and Blake Shelton.

She ended up choosing Blake, and made it all the way into the quarterfinals. Even though Blake has taken many other contestants to the finale, he has maintained that RaeLynn is his “favorite” Voice contestant he has ever coached.

Today, RaeLynn has a number of hit songs to her name, including “God Made Girls” and “Love Triangle.” Her most recent single, “Bra Off” was released in 2019.

Emily Ann Roberts was just 16 years old when she made her Voice debut during Season 9. She sang Lee Ann Womack‘s “I Hope You Dance,” and earned a two-chair turn from Adam and Blake.

She picked Blake as her coach, and he helped guide her all the way to the finale. Team Adam’s Jordan Smith was named the winner that season, but Emily Ann came in second, with her fellow Team Blake member Barrett Baber, placing third.

Today, Emily Ann is 21 years old and busier than ever! She released a number of new songs in 2018, including “Stuck On Me + You” and “I’ve Got Forever.” Knowing how talented she is, we’d say she’s going to be around in the country music community “forever” as well!

I’m headed back to play the Opry THIS TUESDAY!!! ?? Y’all I’m so excited! Get your tickets and come see us for @opry at the Ryman!???

At the age of 20, Mary Sarah impressed the coaches of Season 10 with what is still regarded as one of the best Voice blind auditions in history. She performed Connie Francis’ “Where the Boys Are,” and got all four coaches to turn their chairs.

As many country-singing contestants tend to do, she chose Blake as her coach. She made it all the way to the semifinals before she was eliminated.

The now 24-year-old Mary Sarah has kept up a rigorous touring schedule. She also got the chance to make her debut at the Grand Ole Opry, and has played there many times since.

Happy Friday! ✨ I hope you find yourself a real cute bathroom to take pictures in. ? • • • #LadiesNight #BathroomDesign #Happy ?; @crossatlantic

Although then 23-year-old Cassadee Pope had previously been the lead singer of a rock group and performed the alternative rock song “Torn” for her blind audition, she wanted to take her solo career and time on The Voice in a different direction.

She wanted to be a country singer, and she proved that when she picked Blake as her coach after earning a four-chair turn during the blinds.

Blake not only helped lead Cassadee to the Season 3 finale, but the winning title. She has since gone on to become one of the show’s most successful contestants, having charted multiple singles. You can also call her a Grammy-nominee, since her #1 duet with Chris Young, “Think of You,” was up for an award in 2017.

Most recently, 30-year-old Cassadee debuted her second studio album, Stages, which was one of the most anticipated country releases of 2019.

Good luck to all my buds who are nominated and performing on the @cma’s tonight! I’ll be watching from the comfort of my couch. (Full disclosure: this is not my couch and I do NOT look like this right now ?) ? @chonsuego

At the age of 16, Zach Seabaugh charmed three of the four Voice coaches with his Season 9 blind audition performance of  Sam Hunt‘s “Take Your Time.” But you probably remember his later performance of “Brand New Girlfriend” even more!

Seabaugh’s addition to Blake’s team placed the country superstar in a prime position, as he eventually won over a number of other talented country singers as well.

Two of those singers were Emily Ann and Barrett Baber. After Blake’s team was cut down to only three contestants, Emily, Barrett, and Zach were the ones that remained for multiple weeks until Zach was eventually eliminated in the semifinals.

Today, Zach is 21 years old and has grown up a lot since his time on The Voice. But his talent is one thing that hasn’t changed, and he continues to share it with audiences all over the country.

Unlike the other country contestants previously mentioned in this list, Meghan Linsey did not end up on Blake’s team following her blind audition performance in Season 8. Age 28 at the time, Meghan wowed the coaches with her rendition of The Everly Brothers‘ “Love Hurts,” but Blake did not turn his chair.

She initially started out on Team Pharrell, but was available for steal following the battle rounds. That’s when she finally landed on Blake’s team, and he took her to the finale, where she placed second behind Sawyer Fredericks.

Now 34, Meghan continues to make her mark on the industry. She regularly releases new music and covers, so be on the lookout!

If you’ve been a longtime Voice viewer, you remember watching then 37-year-old Gwen Sebastian take to the stage for her blind audition during Season 2. She sang Sugarland‘s emotional hit “Stay,” and got three coaches to turn for her.

She of course, chose Blake as her coach. However, she was eliminated before the show ever went live, so fans never got the chance to vote on her fate.

Despite her earlier departure from the show compared to the other contestants on this list, Gwen is one of the most successful. Now 45 years old, she has released two albums since her time on the show, including her acclaimed 2017 release, Once Upon a Time in the West: Act 1.

If you’re a fan of Miranda Lambert‘s, you’re probably quite familiar with Gwen, since she has been a part of her band for some time now and has provided backing vocals on her records. She has a pretty good gig with her!

This is me definitely “NOT” posing in any of these [email protected] ?: @blusanders

At the age of 16, Danielle Bradbery proved to the Season 4 Voice coaches she had something special with her performance of Taylor Swift‘s “Mean.” She got three of the four coaches to turn, and to no surprise, chose Blake as her coach.

Blake helped turn her into a champion, and she went on to win the season. In doing so, she became the show’s youngest-ever winner until Sawyer Fredericks of Season 8 broke her record.

Danielle has been a present force in the country music community ever since. She is now 23 years old, and has experienced a number of huge successes in recent years.

Her sophomore album, I Don’t Believe We Met, released in late 2017, was a Top Ten record. On top of that, her newest single and duet with Thomas Rhett, “Goodbye Summer,” experienced her greatest Country Airplay chart success since 2012.

You know who else competed on Season 4 alongside Danielle? A country duo named The Swon Brothers, who found themselves on Team Blake following their blind audition performance of Tom Petty‘s “American Girl.”

The duo ended up placing third, meaning that Blake could brag about having the winning and third-place acts on his team.

Since their time on the Voice, the Swon Brothers have made their mark as one of country music’s hottest duos. They’re now known for hit songs such as “Later On” and “Pray for You,” and got the chance to tour with Carrie Underwood in 2016.

17-year-old Jake Worthington got three chairs to turn when he auditioned for the Voice during Season 6 with Keith Whitley‘s “Don’t Close Your Eyes.” A country boy like him knew he had to pick Blake as his coach, and so he did.

By then Blake had proven that he knew how to lead country stars to the finale. He took Jake there as well, and he came in second place behind Josh Kaufman.

Jake is now 24 years old, and he’s still keeping it country. He consistently has new music for his fans to enjoy, and tours all over the nation. A quick look at his website shows a number of tour dates scheduled throughout the year at all sorts of venues!

When he was 35 years old, Craig Wayne Boyd earned his spot on Season 7 of The Voice by performing a powerhouse rendition of Travis Tritt‘s “The Whiskey Ain’t Workin’.” He got two chairs to turn, and one of those chairs belonged to Blake.

He chose the country superstar as his coach, and they went all the way to the finale together, which Craig won.

Today, Craig remains one of the show’s most successful winners. He released a new album in 2017, and has dropped two new singles since then as well. On top of all that, he has also welcomed three new children, daughter Dakota, and sons Graydon and Boston.

Burgers and Beats tonight y’all @hrcnashville Might be some special guests, might be a few throwbacks and some new stuff too! Bring the family and come on out! Doors at 530

Well folks, what do you think? Which one of these country Voice stars has changed the most since they competed on the show?

The passage of time has only made these artists even more talented than they were during their Voice days. They have accomplished so many great things!

Every now and then these contestants return to the show that started it all for them, whether it’s to perform, mentor, or just catch up with their old coach. You can watch one of Cassadee’s reunions with Blake from 2017 in the video below, in which she chats about her success and her Grammy-nominated song.

Congratulations to Cassadee and all of the other Voice stars for everything they have achieved over the years!