By Miranda Raye on January 7, 2021
Advertisement 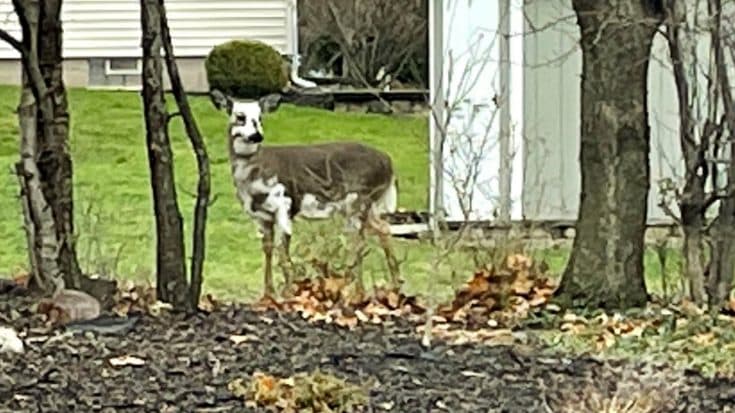 According to Mossy Oak, studies show that less than 2% of all whitetail deer are considered to be “piebald.” Mossy Oak defines a piebald deer as such:

So why is it that piebald deer are such rarities in nature? Mossy Oak explains how it all has to do with genetics:

“Since albinism and piebaldism are recessive traits, both parents must carry the trait to have albino or piebald offspring. The genes responsible for piebald and albino deer are not dominant and oftentimes the deer carrying these genes are biologically inferior.”

Because piebald deer are so rare, anyone who sees one can consider themselves to be incredibly lucky.

Recently, one fortunate New York resident named Dennis O. spotted a piebald deer in the village of Fairport. He managed to snap a clear picture of the animal, which was standing in the landscaping of someone’s yard.

The back of the deer was brown, while its chest and face was white with a few brown spots.

Dennis’ photo of the deer was posted on the 13 WHAM ABC Facebook page with the caption “No, it’s not a statue. One of our viewers spotted what appears to be a piebald deer in a yard in Fairport this week.”

Check out the photo of the piebald deer below.

No, it’s not a statue. One of our viewers spotted what appears to be a piebald deer in a yard in Fairport this week. (?: Dennis O)

If you’d like to see more piebald deer press “play” on the video below. It was filmed in 2015 at the Shalom Wildlife Sanctuary in West Bend, Wisconsin, and shows a whole herd of piebald deer.

Have you ever seen a piebald deer before? If you have, you’re one of few people who can say so!