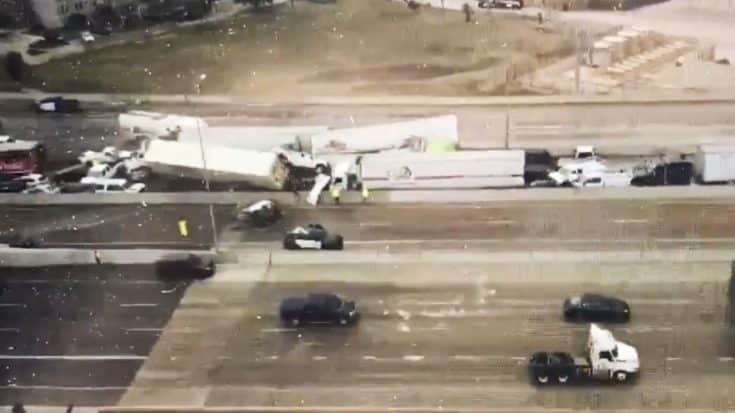 A multi-car pileup of more than 100 vehicles has shut down a highway and left people trapped inside their cars in Fort Worth.

The incident happened along Interstate-35W at around 6:30 a.m. after freezing rain fell overnight and into the morning hours. The roads were so slick that even first responders struggled to reach vehicles. In a statement obtained by CBSDFW.COM, Fort Worth Fire Department public information officer Mike Drivdahl recalled:

“First responders actually had difficulty getting to the vehicles. As they were making their way on the freeway to get to those vehicles it is very slippery. We did have to get quite a bit of sand out here…we did everything we could to get as much traction as possible.”

Media is NOT allowed inside the building.

First responders are now calling the pileup a ‘mass casualty incident.’ At least five people were killed in the crash, and 36 people have been transferred to local hospitals.

Unfortunately, responders have struggled to reach some of the trapped people. As seen in video footage obtained by local news stations, dozens of cars are stacked on top of each other on the interstate, creating challenges for rescue teams. It is predicted that the mass accident will take hours to clear.

The view from the sky shows just how devastating and long this path of destruction is in #FortWorth.

So many cars. And a whole lot of semi trucks.#I35PileUp @wfaa pic.twitter.com/2xXgGgcZYF

Watch the full report in the video below.