Pilots Credited For Saving Dale Earnhardt Jr. And His Family From Fiery Crash 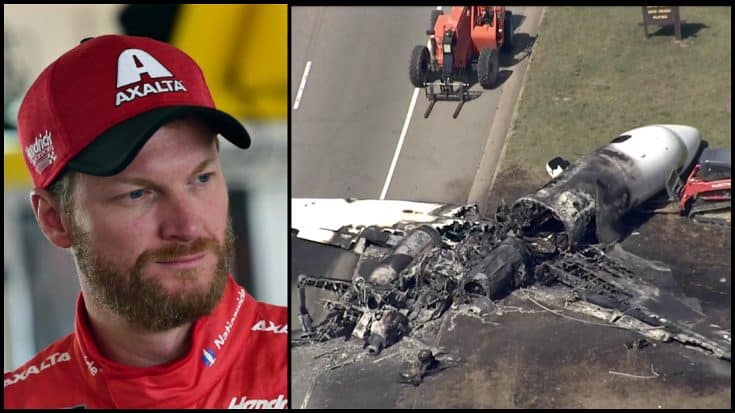 The National Transportation Safety Board has released its preliminary report of the plane crash involving Dale Earnhardt Jr., and in the documents they credit Earnhardt’s pilots for saving the NASCAR legend, his wife and their daughter.

The crash happened last Thursday (August 15) at Elizabethton Municipal Airport in Tennessee. Officials said the aircraft first touched down at the beginning of the runway before bouncing twice as it continued down the runway. Video captured by surveillance cameras in the area show that the plane’s right wing contacted the runway after the right main landing gear collapsed on the third touchdown. The Cessna Citation then went off the runway, down an embankment and through a chainlink fence. It proceeded to go up another embankment before coming to a rest on the side of a busy Tennessee highway.

The aircraft almost immediate caught fire. Footage captured by passersby show Dale Jr., his wife and his daughter leaving the aircraft as it burns. According to the NTSB report, after the plane came to a stop, the pilot and co-pilot “secured the engines and assisted the passengers with evacuation. The main entry door was utilized to exit the plane.”

44-year-old Earnhardt, his wife Amy, and daughter Isla were transported to the hospital for evaluation, but were discharged without serious injuries.

In the days since the crash, Earnhardt has remained silent. But, on Monday (August 19), the driver broke his silence with a statement posted to social media. In the statement, Dale Jr. thanked everyone for their support and prayers and offered thanks to hospital staff, emergency personnel and his pilots for their response to the accident. He also made it clear that he would not be discussing details of the crash because it is currently under investigation.

Earnhardt also addressed the crash on his podcast Monday afternoon prior to a prerecorded segment. In the message he admitted that the last few days had been difficult and that he and his family are trying to get back to normal.

“We’re just trying to process what we went through, and we appreciate all the privacy we’ve been extended to do that,” Earnhardt said. “It’s been a very difficult few days for everybody. Me, my wife and our family are just trying our best to get back to normal as soon as possible.”

Our thoughts and prayers continue to be with Dale Jr. and his family as they recover.