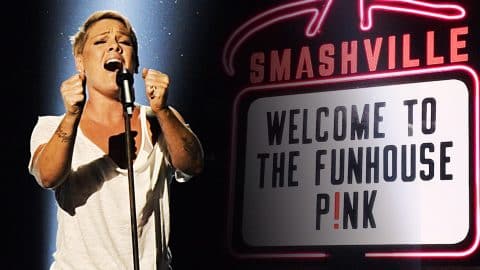 Moments after finishing an arena concert, she walked across the street to Tootsie’s Orchid Lounge for a one-of-a-kind surprise that has left Nashville in a state of disbelief – and utter delight!

Pink, a punk-rock popstar who got her start with a Georgia-based record label, has tried her own hand in country music in recent years and now is playing pop-up shows at famous Nashville venues.

The 39-year-old mother of two has been on her Beautiful Trauma World Tour for just over a year and during a recent stop in Nashville, she gave folks at nearby Tootsie’s a true country surprise when she stopped by after her show.

No one knows how to make an opening number look THIS good. @Pink | #BeautifulTraumaWorldTour pic.twitter.com/m4vfdyPDI6

Pink, who was featured on Kenny Chesney’s hit No. 1 single “Setting the World on Fire,” dazzled the audience with a series of impressive stage routines – including swinging from a chandelier while singing the opening number.

Beyond just singing her own gritty, rock-flavored pop music, Pink has also covered some incredible standards from history and often will mix these in with her own music on tour.

Most recently, she sang a tribute to Dolly Parton for the MusiCares Person of the Year award and for the 2018 Super Bowl, Pink also dazzled the country with the national anthem – even though she was battling the flu.

With one of the most powerful and natural voices in pop music today, Pink truly has some grit and talent that would fit in almost any genre she sings – so there’s no question why she decided to drop a near-perfect cover of “Me and Bobby McGee” during her surprise show at Tootsie’s!

For folks who haven’t followed Pink’s career – she’s been singing this killer cover of a Janis Joplin / Kris Kristofferson classic for years, but it’s one of those performances that’s so good folks can’t stop talking about it!

“Me and Bobby McGee” (which was penned by Kristofferson) has been considered a country and rock staple ever since it was released in 1971 by Janis Joplin and has been performed by countless singers in both genres – including Kristofferson, Waylon Jennings, Grateful Dead, and even Miranda Lambert.

AWESOME! After her show at @BrdgstoneArena, @Pink headed across the street to sing a rendition of "Bobby McGee" at Tootsies!

A video of Pink’s pop-up show at Tootsie’s Orchid Lounge was shared to social media by several local news stations after spectator (and fan) Jeff Eslick caught this wonderful moment with his smartphone.

Check out the clip in the tweet above from Fox Nashville – and listen to a full performance of her cover from a 2017 concert below.

As one commenter noted with great enthusiasm, “I closed my eyes a minute she almost sounded like Janis back in the day.”

Tell us your thoughts in the comments!