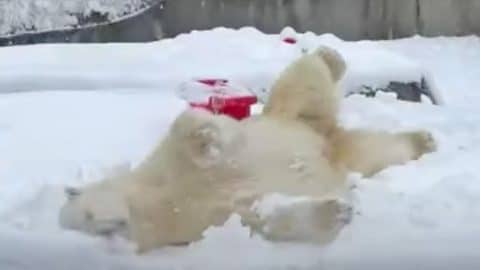 Blizzard the polar bear is going viral after a video of him playing in the snow on February 13, 2020 was posted. In the video, Blizzard nose dives right into the fresh, cold powder.

The 25-year-old bear has found his home at the Point Defiance Zoo & Aquarium in Tacoma, Washington. Standing at ten feet high, Blizzard was orphaned as a small cub with no chance of survival in the wild before he was rescued.

Already past the normal life expectancy of a polar bear, Blizzard has a playful side, too, as seen in the snow video. Viewers can get a good laugh watching him burry his head in the snow and just lay there.

The Point Defiance Zoo has worked hard over the years researching polar bears and studying bears such as Blizzard in order to better understand these animals and preserve their habitat. Blizzard has helped by testing of new methods of attaching GPS tracking devices to wild polar bears. Thanks to him, numerous wild polar bears are able to help contribute to research.

Along with Blizzard, the zoo also provides a home to other Arctic animals such as the Arctic fox, and three muskox. Although, none of them seemed to enjoy the snow as much as Blizzard!

Watch the video of Blizzard’s snow day below.