By Miranda Raye on March 11, 2020
Advertisement 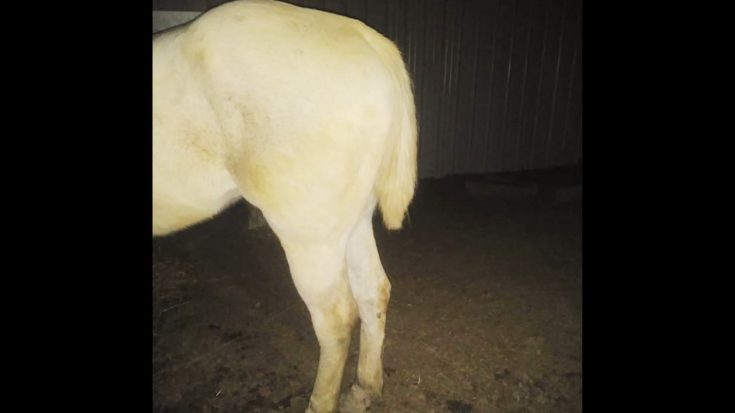 Between 5:30 PM and 8:30 PM on March 10, someone snuck on to a property on North River Road in Camden County, North Carolina, and committed a bizarre crime. The person or persons cut the hair off the tail of a show horse that resides on the property, set another horse loose, then fled.

The horse, named Thunder, previously had long hair on his tail. That hair has since been trimmed short, as photos from the Camden County Sheriff’s Office show.

Detectives are now searching for the suspect(s) responsible for cutting the hair off of Thunder’s tail.

Oddly, this isn’t the first time this has occurred on the property. Thunder’s owner told WTKR this same type of thing has happened three times.

Before Thunder’s incident, his owner visited local wig shops, and discovered someone was coming around to the stores trying to sell a bundle of hair. Horsehair is often used to make wigs, hair extensions, and various art projects.

It takes a long time for horses to grow the hair on their tails, and it’s estimated it will take several years for Thunder’s tail hair to reach its prior length.

This can have a great affect on Thunder, since horses use their tails to flick away pesky insects that bite.

Look below to see the Camden County Sheriff’s Office’s post about the incident and see the photos they shared of Thunder’s tail.

Anyone with any information about this incident is encouraged to contact the Camden County Sheriff’s Office at (252)-338-5046.

A similar instance occurred back in 2016 in Dodge County in Wisconsin. In that case, a person snuck in and cut the hair off of a miniature horse’s tail. This was the second time such a thing happened on that particular property.

You can watch a news report about that prior incident below.

We hope the Camden County Sheriff is able to find the person or persons responsible for cutting the hair off of Thunder’s tail. And hopefully the same thing doesn’t happen to another horse.