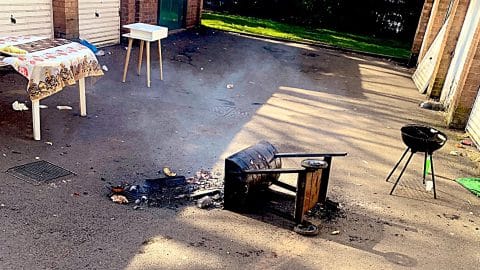 The coronavirus has spread rapidly throughout the European continent and one of the last countries to go into lockdown is the United Kingdom.

Yesterday, March 23, 2020, the United Kindom finally went into full lockdown and Prime Minister Boris Johnson announced that police will break up any public gathering and fine those who do not follow the rules of staying indoors.

“From this evening I must give the British people a very simple instruction — you must stay at home,” Johnson said in a public announcement. “Because the critical thing we must do is stop the disease spreading between households.”

For most people, they are obeying the order to quarantine and that will save countless lives. However, for a group of 20 people living on Foleshill Road, near apartments in Culworth Court, they did not adhere to the message.

Police officers patrolling the streets in that neighborhood said they smelled food cooking and saw smoke coming from a nearby alleyway. As they pulled up to investigate they noticed 20 people, mostly individuals around the age of 60, who were having a barbecue party.

The officers reminded the folks who were all standing shoulder-to-shoulder that the country is in full lockdown and they should not only be staying in their homes but when they’re outside they should be adhering to the social distancing guidelines. One lady screamed at the officers saying, “My children need to eat.”

The officers asked the woman why she isn’t cooking the meal for her kids in her home kitchen and then told the partiers to shut down the barbecue. Authorities said the woman couldn’t give them an answer and the group continued to ignore the officer’s orders. The group then began to protest on why they should be able to continue their barbecue.

It was at this time the officers felt the need to tip over the grill in attempts to disperse the crowd that was unwilling to leave. Fortunately, after doing that the barbecue-goers realized they needed to obey the law and went back to their homes.

West Midlands Police released a statement on Facebook saying, “If people do not listen to our advice then we will move to enforcement – and our Chief Constable has vowed that we will target the most problematic behaviour.“