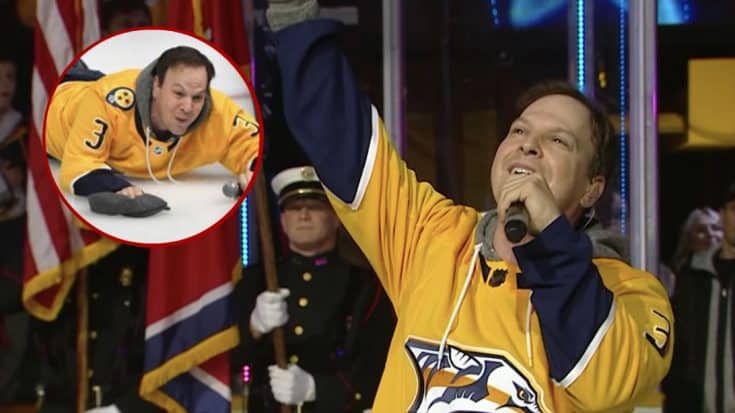 Hockey is supposed to be a contact sport only for those playing on the ice. But, pop superstar Gavin DeGraw learned the hard way that singing the national anthem can be dangerous as well.

WHO IS GAVIN DEGRAW

DeGraw, a New York native, grew up singing at every opportunity. After graduating high school, the singer took on gigs at local hotels and restaurants which led to a series of fortunate meetings that would eventually launch his career. As word spread of Gavin’s talent, he ended up receiving an offer for a record deal, but turned it down. Unlike many aspiring artists, DeGraw knew he had some growing to do before he was ready for the big time and chose to focus on honing his singing and songwriting skills, all while working as a waiter and newsstand clerk.

The decision paid off when he eventually signed a record deal with legendary producer Clive Davis. DeGraw’s debut album Chariot was certified platinum and kickstarted his incredible musical success. In 2012, DeGraw competed on Dancing With the Stars, but was eliminated during the show’s fifth week.

Two years ago, the Nashville Predators started a tradition of dipping into the city’s deep talent pool to find performers to sing the national anthem prior to the team’s playoff games. We’ve seen the likes of Carrie Underwood, whose husband is a retired Preds captain, Little Big Town, Trisha Yearwood and Vince Gill all take their turn singing “The Star-Spangled Banner” for the Stanley Cup finals.

On Saturday, Gavin DeGraw took his turn singing the national anthem prior to Game 5 of the Stanley Cup Playoff series between the Nashville Predators and the Dallas Stars. After finishing his performance, DeGraw threw his hands in the air and stepped backwards, his foot leaving the protection of the carpet runner. As soon as his foot hit the ice, his feet went out from under him and he took a hard fall.

DeGraw handled the moment with class, laughing at himself with posts on social media.

“I didn’t realize singing the national anthem was a full-contact sport,” DeGraw joked on Instagram alongside a clip of the fall.

I didn’t realize singing the national anthem was a full-contact sport. #ImOkay ?: @codyslusher

Thankfully, DeGraw is okay. But, perhaps he’ll wear a helmet for his next anthem performance. See Gavin DeGraw’s full “Star-Spangled Banner” performance in the video below.