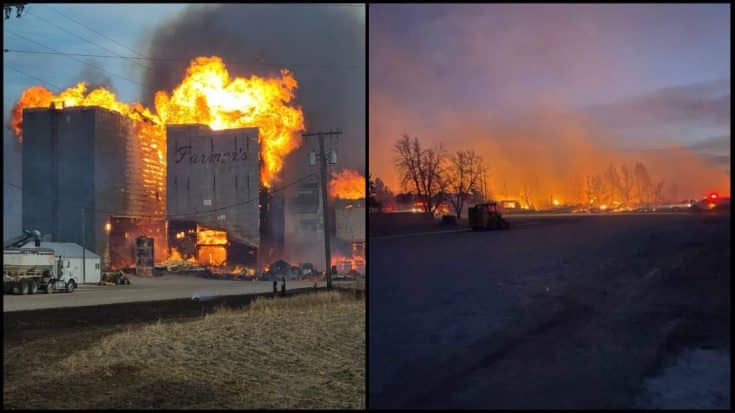 Unseasonable warmth and a lack of precipitation is causing huge problems for Big Sky country. Residents of the central Montana community of Denton are counting their blessings after a wildfire swept through their town. More than 25 structures were destroyed by the blaze, but no serious injuries or loss of life occurred.

The Westwind fire is burning through the town of Denton, MT. Here is a video from Mike B. of some of the damage to the town. Please pray for Denton. #mtwx #mtfire pic.twitter.com/TjfIrFNH7V

Located south of Great Falls, Denton is a picturesque town with a rich history rooted in farming and the railroad. The fire that started late Tuesday (November 30) due to downed power lines wasn’t initially thought to be a threat to the town, but high winds fueled the fire and caused it to travel quickly across the drought-ridden prairie.

“The dirt and the smoke were blowing so bad you couldn’t even see the flames and we didn’t even know where the fire was a lot of the time when it was out in the prairie,” volunteer firefighter Brock Linker told USNews.

Midday Wednesday (December 1), Linker was working close to where the fire had started when he got a call that the fire had moved into Denton. The town’s 300 residents were evacuated around midnight but were allowed to return to their homes a few hours later when the wind seemed to die down. But, the reprieve was short-lived as wind speeds increased once again and forced residents from their homes.

Four grain elevators that have stood for more than a century caught fire first then the flames quickly spread through the town, eventually destroying at least 24 houses along the town’s south side.

Power outages shut down water pumps leaving the town without water. Firefighters from all over the Treasure State came to Denton’s aid, some of them hauling water and equipment more than 200 miles. Displaced homeowners sought refuge with family members and friends while they wait to rebuild.

The tiny community has survived numerous tragedies and natural disasters for more than a century, and each time they have come together like a story right out of a history book. This time will be no different.

See footage of the fire as it burned through rural Montana below.