By Jennifer Pernicano on October 16, 2018
Advertisement 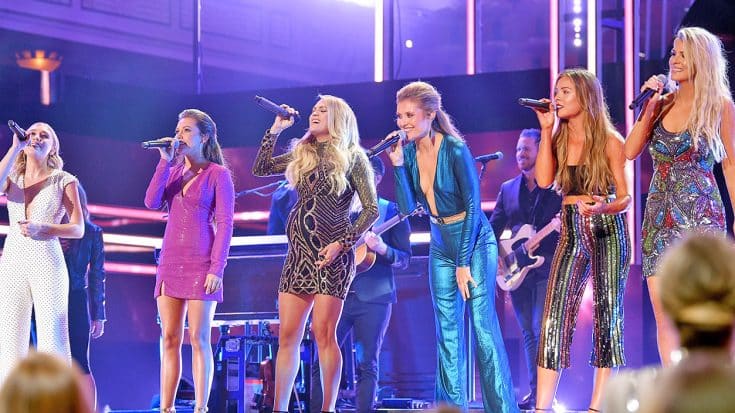 When Carrie Underwood announced she would be hitting the road to support her Cry Pretty album, fans were ecstatic! Although her pregnancy announcement in the same video may have overshadowed the touring news, we were even more excited for her to hit the road when we heard who would be opening for her.

Taking the term “Girl Power” to a new level, Underwood invited Runaway June and duo Maddie and Tae to join her on her 2019 Cry Pretty Tour 360!

Ooh baby do we have a bundle of info to share with you! Click here for info on The Cry Pretty Tour 360! #CryPrettyTourBundle #CryPrettyTour360 #CryPrettyAlbum CALIA by Carrie http://www.carrieunderwoodofficial.com/

Are y'all ready for a whole lotta female power? We're celebrating the women of country on CMT Artists of the Year Wed, Oct 17.

Not only were all these incredible women honorees, they also each gave incredible performances showcasing just why they are recipients of this honor.

Underwood, Runaway June, and Maddie and Tae gave fans a taste of what’s to come for their Cry Pretty Tour 360.

The “Cry Pretty” singer kicked off the medley solo, singing a slowed-down a cappella version of Tammy Wynette’s “Stand By Your Man.” She was joined by Maddie and Tae and Runaway June when Dolly Parton’s iconic piano intro to “9 to 5” began, getting everyone out of their seats with their awesome harmonies.

Maddie and Tae transitioned into “Rockin’ with the Rhythm of the Rain” by The Judds before Underwood took charge with Martina McBride’s “Independence Day.”

Runaway June moved side stage to honor Faith Hill with her hit “Wild One” and Underwood brought the sass with the Reba classic “Why Haven’t I Heard I Heard From You.”

The female supergroup then performed a snippet of “Man, I Feel Like A Woman,” which was so fitting for the message of the night – female empowerment! Underwood closed out the night with her anthem “Cry Pretty,” proving why she is considered one of the best in business.

Watch their epic performance in the video below!

When @carrieunderwood, @MaddieandTae, and @runawayjune take the stage together for the first time tonight. ?????? SO ready for 2019! pic.twitter.com/0fjPRtLdo4