By Manly Bryant on April 23, 2019
Advertisement 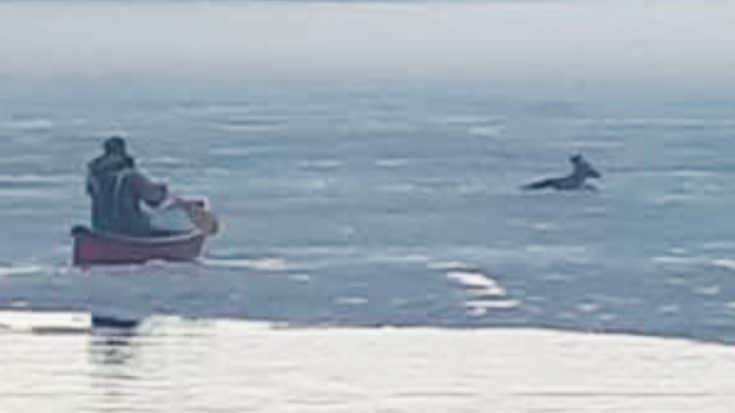 According to Muskoka411.com two men, Trevor Nicholls and Grant Clifford, were driving down their normal route by Lake Rosseau to work and looked over to see a deer stuck in an icy lake. It seemed to have broken through and was struggling to get out.

“We were driving by on our way to a job site when we noticed a deer standing on the ice,” said Trevor Nicholls. “Upon closer inspection, we realized there was another one trapped in the ice.”

The two gentlemen pulled the car over and got out to see if they could find a way to help the deer. After they asked some locals at a nearby boathouse if they could borrow a canoe, they decided to go after it.

The locals didn’t mind, so Clifford took the canoe and started paddling out toward the deer. There was a massive sheet of ice in between him and the deer, but he was able to break through in order to make a path to reach it.

“When I made it to her, she relaxed and followed me,” Clifford said. “I held her head to help her relax in the water and she would just stop and let me help her get her breath.”

The deer started following Clifford as he paddled back to the shore. While Trevor was still on land filming them, he said, “Come on buddy, follow him”.

The deer finally made it to dry land, but because it had been fighting to survive for so long, it was completely exhausted and fell back into the water by the shore.

Clifford and Trevor both grab her to pick her up and that’s when they noticed she was pregnant! They very gently got her back onto land and laid her down. She rested for a while and regained her strength. You could tell she was very grateful for the men’s support.

The guys couldn’t stay long for they had to get back to their job but the story had a happy ending! She was able to rest and warm up in the sun – but most importantly, her unborn baby was safe and sound.