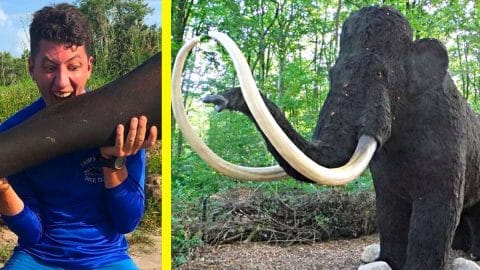 Professional educators and amateur paleontologists, Henry Sadler and Derek Demeter, were diving in the Peace River near Arcadia, Florida this week when they found a massive four-foot, 50lb bone that could be anywhere from ten thousand to millions of years old.

Derek said when he first spotted the bone, “I couldn’t believe it. I was in denial. It was really neat to see that be discovered,” Florida Sportsman Magazine reported him saying.

Henry was the first to locate the bone in the river and excitedly showed Derek his find as they posed for pictures with it. They knew they had something amazing. It didn’t take much of examining the bone to learn that it was the leg bone of a Colombian mammoth.

Colombian mammoths were living 11,700 years to 2.6 million years ago.

The Colombian mammoth was a short-haired, elephant-like creature and one of the largest species of mammoths ever to walk the earth. It stood a colossal 16 feet high and could live up to 80 years, which is 20 more years than the average elephant’s lifespan today of 60 years.

“While the Peace River is a well-known fossil and shark tooth hunting location, a find like this, particularly of this size and quality, is extremely rare,” Florida Sportsman Magazine wrote about the bone.