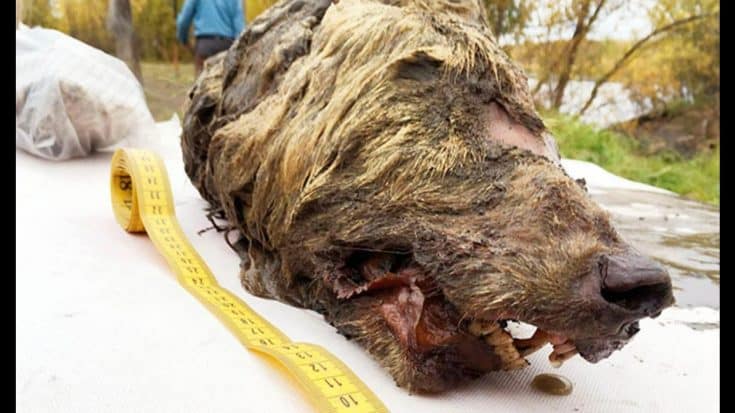 A 40,000-year-old wolf head has been found perfectly preserved by thousands of years of permafrost in the Arctic region of Russia’s Yakutia province.

The head, which is more than 25% larger than that of today’s gray wolves, was discovered by people searching for mammoth ivory pieces as the permafrost in the Arctic melts due to rising global temperatures.

In Siberia, found the head of a prehistoric wolf with a whole brain

Scientists have found that the wolf lived 40 thousand years ago, and his head was cut off. pic.twitter.com/ED9PijR5Hu

Previously, scientists have discovered frozen wolf cubs, but the discovery of a grown adult wolf’s head is a significant and new piece of evidence of life tens of thousands of years ago.

“This is the first time the head of an ancient wolf has been found whose soft tissue has been preserved after 40,000 years, a grown wolf,” Albert Protopopov told CNN.

As the planet continues to warm, more remains and prehistoric evidence is expected to surface. An ancient cave lion cub is also being investigated after it was discovered in the same region.

Scientists are currently building a digital replica of the wolf’s brain and skull based on the sample found and a separate team in Stockholm is analyzing the wolf’s DNA.

Just earlier in 2019, liquid blood and urine was discovered within the remains of a 42,000 foal that was also preserved by permafrost.

Check out the full report below and let us know what you think of this miraculous discovery!