Priscilla Shares What Elvis Would Have Thought About Movie At Graceland

By Miranda Raye on June 3, 2019
Advertisement 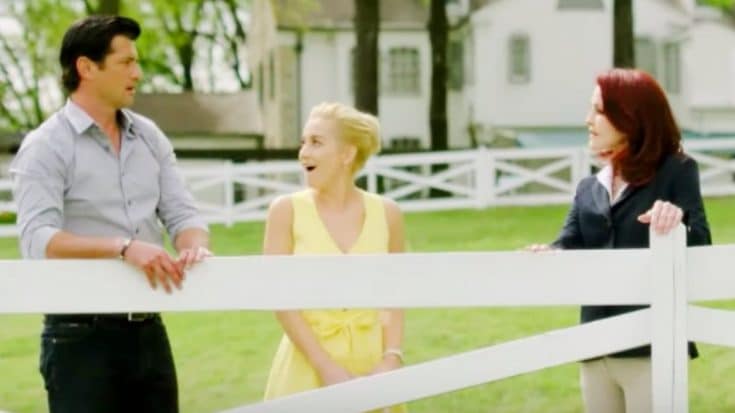 At last, fans of the Hallmark Channel movie Christmas at Graceland got the chance to catch the film’s highly anticipated sequel on Saturday (June 1). Titled Wedding at Graceland, the film follows Clay (Wes Brown) and Laurel (Kellie Pickler) as they plan their wedding.

Like the first film, a large portion of Wedding at Graceland was filmed on the Graceland estate. Years ago, Elvis‘ former Memphis mansion and its grounds were transformed into a popular tourist attraction by his ex-wife, Priscilla Presley, who continues to promote events and new expansions on the grounds.

So it only seemed fitting that she was given the chance to make a cameo appearance in Wedding at Graceland to share a fond memory of her relationship with Elvis.

Just finished on Friday a cameo on the Hallmark Channel, Wedding at Graceland, the sequel to the highest rating Hallmark…

Prior to the film’s debut, Priscilla teased some information about it. She said it was filmed at Graceland’s own wedding venue, known as The Chapel in the Woods.

The venue was a treasured part of the estate for 18 years before it underwent a makeover and was reopened in the summer of 2018.

“Love me tender, love me true…” As featured in the Hallmark Channel movie “Wedding at Graceland,” you will fall in love with Graceland’s Chapel in the Woods as the perfect setting for your fairytale wedding. Plan your wedding today at https://t.co/PU9jHktQ8S. pic.twitter.com/jM8Xr8rLnC

While Priscilla was clearly overjoyed about the movie being filmed on the Graceland estate, Elvis fans couldn’t help but wonder if “The King” would have approved of the film. After all, he was famously private when it came to his personal life and Graceland was his safe place to retreat to.

But Priscilla believes that Elvis would have loved having the Wedding at Graceland cast and crew on his estate.

“Elvis loved to show off Graceland, and he would always say that he was the estate’s first tour guide,” she told Good Housekeeping.

Countless musicians – including the King of Rock 'n' Roll – have been inspired by the city of Memphis, Tennessee. Memphis is a city that is drenched in music; everywhere you go, you feel the soul of the city seeping through in its music, food, people and culture. Elvis Presley could have lived anywhere, but he chose to stay in Memphis. His career took him to countless stages, studios and movie sets, but he always came home to Memphis. Happy 200th birthday, Memphis. Thank you, thank you very much – for everything. #memphis #ilovememphis #choose901 #memphis200 #bicentennial #elvis #elvispresley #graceland #tennessee

She also said that if Clay and Laurel’s wedding was a real one, Elvis may have made a special appearance at the ceremony.

“He had a great sense of humor and loved surprises, especially when it came to love,” she said. “There were a number of times that he would he even go to the chapel in Vegas to check out who was getting married and surprise them.”

Can you imagine having your wedding crashed by Elvis?

Based on what Priscilla had to say, it seems that Elvis would have welcomed everyone involved with Wedding at Graceland. Even though he is no longer with us, his spirit can still be found in the film, as you can tell when you watch the behind-the-scenes clip below.