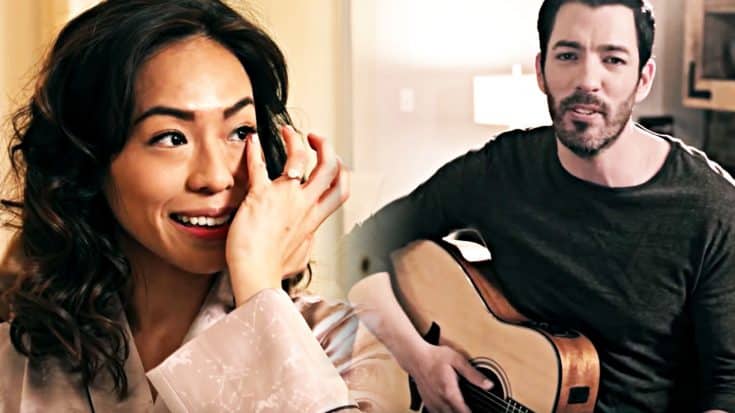 Clearly, there is more this Property Brother can do than just flip houses!

Originally given to his wife on their wedding day, this truly romantic and beautiful song written by none other than one half of the Property Brothers team is a beautiful example of how deep his love runs for her.

Kisses before the big day! #LindaAndDrewSayIDo

Both Drew Scott and Jonathan Scott have dabbled in country music several times before and even released a pair of music videos for their singles “Hold On” and “Let The Night Shine In.” Now, it’s time for one of them to show off his solo singing skills with a brand new tune he wrote to honor his stunning wife.

Drew Scott and Linda Phan tied the knot on May 12th, 2018 in a gorgeous Italian ceremony that was filled with some of their closest friends and family.

Now, as a treat to fans of the famous real estate duo, Drew Scott has released his full music video for the new song called “You Chose Me.”

The video is filled with video clips and images from his wedding, the days leading up to it, and segments of Drew singing and playing guitar while recording the song.

A woman as truly special as @_lindaphan deserved her own special song, written just for her ?. Click the link in my bio to watch the music video for, “You Chose Me”.

In the very beginning of the video, a friend hands the gift to Linda as she is preparing for the wedding. “Drew has something special for you,” she said. Next, Linda unboxes the record and places it on a record player before the tears begin to flow as she hears his voice come across the speaker.

This is one of the best gifts we’ve ever seen from a husband to his future wife – and it’s so beautiful that their special moment was captured on video!

Watch Drew Scott’s music video for “You Chose Me” below and let us know what you think!