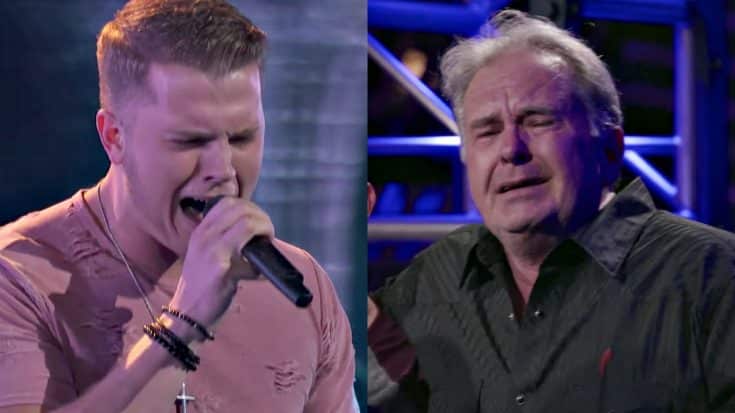 The Voice is back! The reality singing show kicked off its 16th season Monday night and the competition looks more fierce than ever.

Veteran coaches Blake Shelton and Adam Levine are joined on the four-chair judging panel by back-to-back winner Kelly Clarkson and rookie coach John Legend. It’s been clear since the announcement revealing Legend’s role on the show that the other coaches are intimidated by his talent. It didn’t take long for Blake Shelton to put the Grammy Award-winning coach in his place.

Following the evening’s first audition, coach Blake used his only block on Legend to prevent him from acquiring the talent of 24-year old Gyth Rigdon for his team.

Rigdon, who hails from Singer, Louisiana, mostly sings country music, but chose to audition with the classic soul song “Drift Away,” made popular by Dobie Gray in 1973. The song has since been covered by numerous artists, including Waylon Jennings, the Doobie Brothers, and Garth Brooks. In 1976, Dolly Parton was joined by her brother Randy and legendary vocalist Anne Murray for a stunning cover of “Drift Away” for her variety show Dolly!.

When Gyth Rigdon took the stage during Monday night’s Voice Blind Auditions, it only took a few notes for Blake Shelton to know that he wanted the talented southern singer on his team. After turning his chair, Blake used his only block on John Legend. It’s a good thing because Legend indeed turned his chair, as did Kelly Clarkson.

“On the stage you’ve got that Star Search factor about you,” Shelton told Rigdon. “The way you perform is like Garth. I wouldn’t be surprised to see you in the finale.”

Throughout Rigdon’s audition, the camera panned to his father who couldn’t control his tears as he watched his son’s dream unfold from the sidelines. “My dad is my hero. He played guitar and wrote songs all his life and he taught all his kids,” Gyth said of his father whom he credits for his success and love of music.