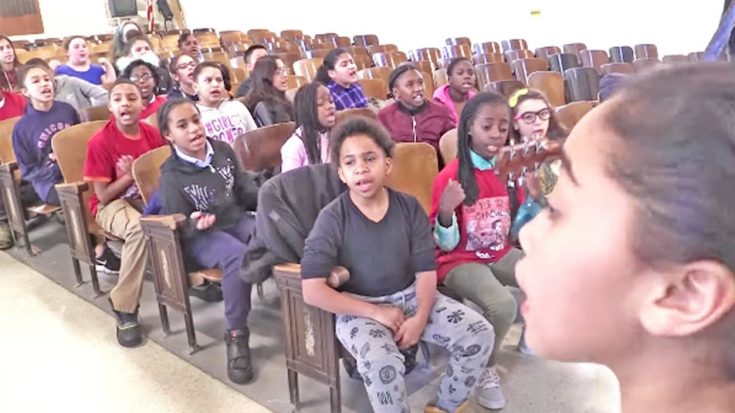 The PS22 chorus has made quite the name for themselves thanks to their director posting videos of their performances online. The chorus is comprised of fifth grade students from Staten Island’s Public School 22 and have gained national attention thanks to their moving performances and have even collaborated with several music stars including Carrie Underwood, Katy Perry, and Fifth Harmony.

When they previously sang with Carrie Underwood, they performed her 2007 hit “So Small” as well her 2012 number one “Good Girl.”

Five years later, the chorus once again performed an Underwood song, but this time, without her – and it’s just as powerful.

Singing her inspiring hit, “The Champion,” which features rapper Ludacris, the fifth-graders showed off the chorus’ pitch-perfect two-part harmonies. One talented singer showed off her impressive pipes by nailing the solo, and two students were chosen for Ludacris’ rap. These kids held their own on a song that is extremely difficult to sing because of Underwood’s incredible range!

As the camera panned to all the students, each and every one looked more inspired than the last and super excited about singing this particular song! You can tell by their mannerisms. Lots of student were performing with their fists clenched near their chests, with some even waving their hands in the air.

Carrie Underwood herself saw the video and posted the YouTube link to her Facebook and wrote, “Each and every one of you is most definitely a champion! So much love for the PS22 Chorus ❤️ This made my day!!!”

Each and every one of you is most definitely a champion! So much love for the PS22 Chorus ❤️ This made my day!!! #SingIt #TheChampion Ludacris Gregg Breinberg (PS22 Chorus Director)

Watch the PS22 Chorus perform “The Champion” in the video below.