Raccoon Breaks Into Texas Judge’s House, It Takes 20 Hours To Remove It

By Manly Bryant on September 5, 2019
Advertisement 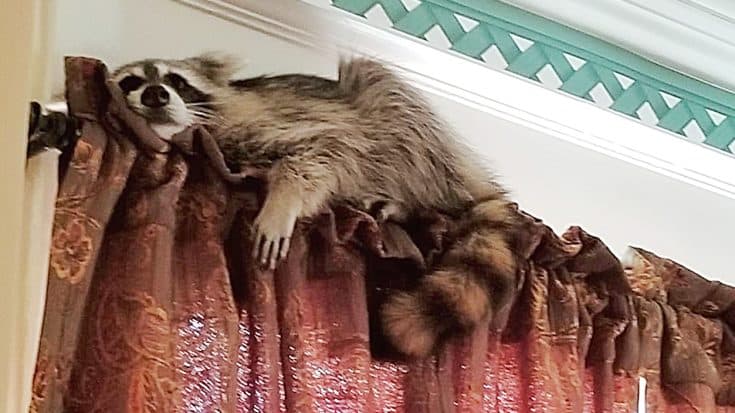 Judge Matthew Wright from Falls Country, Texas, recently shared a few Facebook posts chronicling a standoff with a small raccoon that decided to break into his home.

I need help with a raccoon in the house. This has been ongoing since 5 and i am tired of tracking this thing and trying…

According to the post, Matthew found the raccoon that snuck into his house at 5am in the morning. In an attempt to remove the critter, he decided to place traps around his place to catch it, but instead, it decided to take a nap until 3pm.

More Traps Were Set In Attempts to Capture It

After their nap, Matthew attempted to set up another trap but like before, it didn’t work. By this time it was 6:15pm in the evening and Matthew decided that his next strategy was to try and physically catch it. However, the raccoon was too fast and ended up finding some high ground by climbing the living room curtains and holding its position.

It was at this point the judge realizes he needed to bring out his secret weapon. Since it was a Texan raccoon, he needed to use Texas food to capture it, so Matthew loaded down one of the traps with queso and tamales.

Thankfully after a 20-hour standoff, the raccoon finally climbed down to get his mouth on some of that queso and tamales and got captured.

Matthew updated his Facebook with “authorities have captured Rosebud’s Most Wanted. He will serve 20 – 30 (minutes) then be released with conditions not to enter illegally again.”

RACCOON WATCH 2019While doing a warrant just now, a loud sound was heard in the house. After a 20 hour stand-off,…

No video was ever taken of this epic standoff, however, below is a hilarious YouTube video showing some of the best raccoon moments caught on camera.