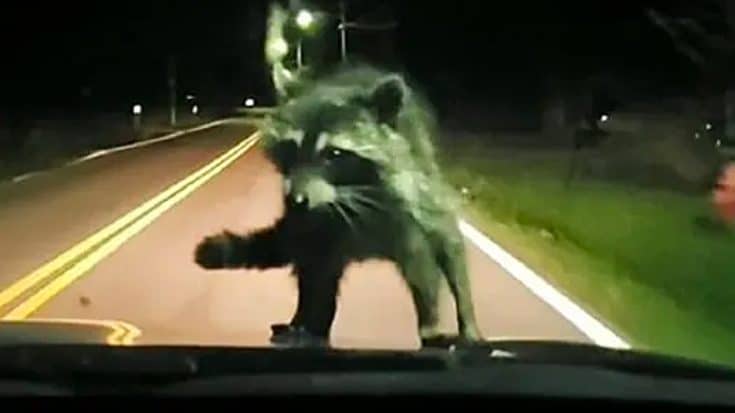 Did I Hit Something?

This real-life video was recorded on May 16th, 2019 when a family was driving home from Clarksville, Tennessee after Haylee Lowry’s baseball game practice. Haylee, who just got her license to drive was excited to drive back to Big Sandy, Tennessee where she lived.

Her dad Ronald was in the back seat sleeping because it was getting dark and her mom, Michelle, was riding in the passenger seat. They were driving down a country road called Poplar Grove Road when Michelle said she felt a big bump like they had hit something.

“It sounded like she hit an expensive pothole, so I asked her what it was,” said Michelle. “She said, almost in tears, ‘Mama, I hit a raccoon!'”

About to cry her eyes out Haylee told her mom what she hit and her mom calmed her down knowing Haylee had a big heart for animals. Michelle told her that these things happen when driving at night and to just keep an eye out moving forward.

Apparently, they drove another eight miles when all of the sudden a full grown raccoon climbed up on the hood of the car. Haylee started screaming as she witnessed this and it woke up her dad in the backseat. That’s when her mom quickly grabbed the camera and started recording.

“At first, I thought maybe our cat had got under the car and rode with us to Clarksville and back,” said Michelle. “But there was the raccoon climbing on the hood! My husband was trying to get Haylee to stop the car. I’ve never seen him so confused.”

The raccoon climbed all the way up to the front window, took a peek inside and then crawled over to the edge of the car. Haylee slowed the car down almost to a complete stop before the raccoon jump from the hood to the ground.

Last Thursday night, Haylee was driving us home from Clarksville. Ronald had fell asleep in the backseat & Haylee was…

Posted by Michelle Carey Lowry on Wednesday, May 22, 2019

Michelle later shared the story on Facebook and it quickly went viral. At the end of it all, everyone was laughing at the situation and happy the raccoon lived to see another day.