Rafter Rescued Coyote Pup From Drowning & Took It On An Adventure 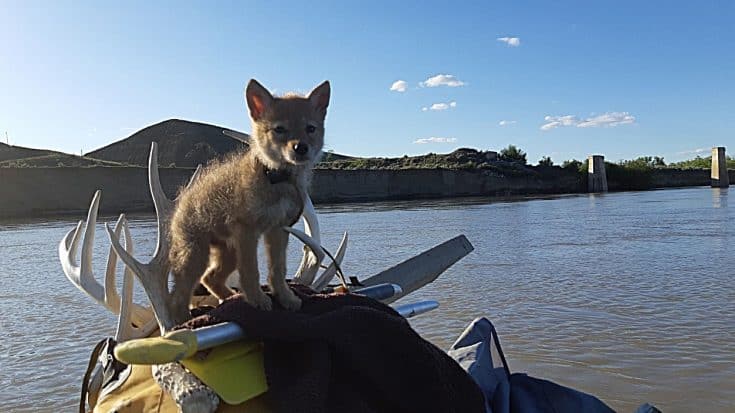 Justin, a rafter from Canada, went on a several-day trip down the Red Deer and South Saskatchewan Rivers.

While he was fishing in the river and enjoying his time, he heard an unusual noise coming from somewhere along the shoreline. At first, he decided to park his raft and investigate the noise source. After hiking up to a higher elevation, he still couldn’t figure out what was happening. So, he went back to his raft and continued fishing.

After some time passed, he heard the noise again and this time saw a little animal splashing and squeaking in the river. The animal’s nose was barely above the water. He was clearly struggling to swim and breathe properly in the dark, murky water.

As Justin pulled the coyote pup from the water, he saw it was unconscious. Justin used his knowledge from CPR to do a modified Heimlich maneuver by pushing on its belly as reported by the Wildlife Rehabilitation Society of Saskatchewan. The water shot out of the animal’s nose, allowing him to breathe again. Justin felt relief and brought the coyote pup back on land and made a fire to warm him.

Justin had no service to call anyone for help during the whole trip, so he decided to keep the little animal with him and take care of him. The little pup would eat with him, cuddle in his jacket and sleep in his backpack. They both enjoyed an unexpected adventure.

As soon as Justin had service back on his phone service, he called his wife for advice. They contacted several organizations before being put in touch with the Wildlife Rehabilitation Society of Saskatchewan (WRSS), whose volunteer helped coordinate the transfer of the coyote pup.

WRSS communicated on their Facebook page that they will be taking care of the coyote pup until he is old enough to be back in the wild.