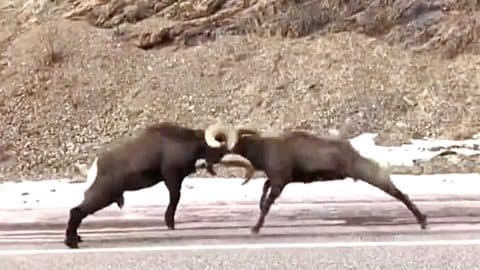 An amazing moment between two rams battling it out in the middle of Highway 38 in Questa, New Mexico was witnessed and recorded by a man passing through.

Randolph Eberle, from Eagle Nest, New Mexico was in his vehicle driving down the road when he saw the rams squaring up. There were three of them standing together, two of them who looked like buddies and one that looked like it was challenging the others.

As he slowed the car down to a complete stop and began recording them, he captured one of the rams rise up on his hind legs and charge towards the challenger. The challenger tightened up and bucked back as they smashed into one another.

Randolph told KRQE News 13, “I was overwhelmed. I looked at National Geographic films and always was fascinated by rams, but to see that actually happen was just, well, like most people say, surreal.”

The rams weigh about 300 pounds with their horns weighing a good 30 pounds on their own. Their official name is Bighorn sheep but they’re most commonly called rams. Randolph says he’s seen many animals on the road during his travels but this is was the most entertaining.

Watch Rams Battle On The Highway Below