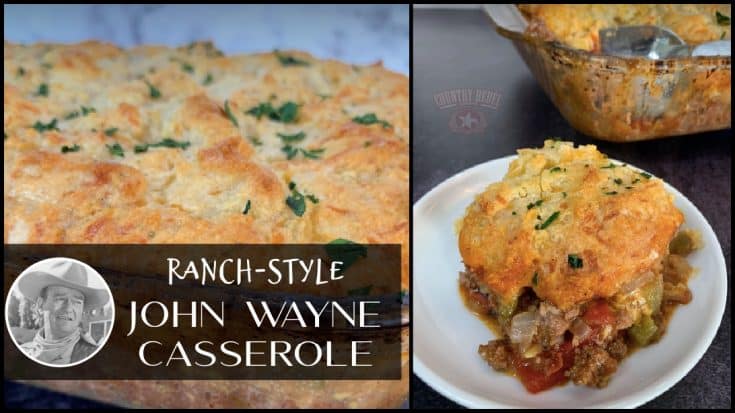 John Wayne Casserole. One of the few casseroles that gives tater tot casserole a run for its money. Loaded with beef, veggies, and cheese, this simple hotdish is topped with flavorful biscuits smothered in butter.

It’s unclear exactly where John Wayne Casserole originated, but it has apparently been around for decades as the Duke himself considered it a personal favorite. According to 12 Tomatoes, “John Wayne was asked to contribute a recipe for the cookbook, Cooking with Love from Cara and Her Friends. Proceeds from the book were to benefit the American Cancer Society. The book was a compilation of recipes from celebrities and John Wayne submitted his favorite casserole. This recipe was released in the book in 1979, the same year that Wayne died from cancer.”

Numerous varieties of this casserole can be found online, but there is one thing that nearly all of them have in common. They feature a biscuit layer and lots of beef. We’ve taken the classic recipe and put our own Rebel twist on it by turning it upside down (putting the biscuits on top instead of the bottom) and added a ranch dressing kick.

We think you and your family will love gathering around the table to feast on this hearty hotdish. Give it a try and let us know what you think!

Stir in taco seasoning and water and bring to a boil. Reduce heat to medium-low and simmer for 10 minutes. Remove from heat and stir in tomatoes and chiles. Set aside.

For cheesy layer:
Stir together sour cream and mayonnaise until smooth. Fold in cheese and set aside.

For biscuits:
Whisk together baking mix and ranch dressing mix until well combined. Stir in water and cheese until well incorporated, being careful not to over mix.

To assemble:
Spread meat mixture into the bottom of a 9-inch by 13-inch casserole dish. Spread cheese mixture evenly on top of the meat. Drop biscuit dough by tablespoonfuls onto the cheese mixture. Bake in preheated oven for 30 minutes or until the biscuits are golden brown and casserole is bubbly around the edges.