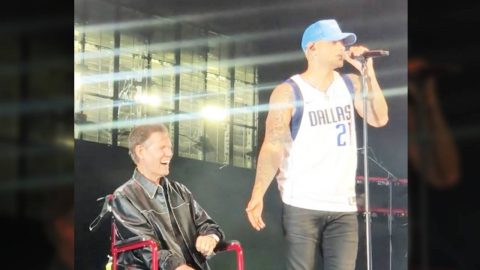 It is no surprise that Kane Brown is a huge Randy Travis fan. The young musician has been singing Travis’ music for as long as he can remember. As Brown was coming up in the country music industry, Travis took notice of not only his talent, but also his appreciation for the classic singers who came before hi.

Because of this, Travis wanted to meet Brown, and did so when Brown was at a radio station singing none other Randy Travis’ “Three Wooden Crosses.” Travis walked in in the middle of Brown’s performance and after the initial freakout, Brown had trouble continuing.

Luckily, Brown was able to redeem himself at the recent 2021 CMT Artists of the Year event, where Randy Travis was being honored with Artist of a Lifetime.

Before diving in to “Three Wooden Crosses,” Brown said, “I’ve done it before by surprise, it was the first time I met him, he came up behind me at a radio station while I was singing it. And then I couldn’t finish the song afterwards, so I guess this is a chance to redeem myself.”

Just a few days later, Brown had a concert in Dallas and told the crowd about both experiences…and Travis himself joined the “Worship You” singer on stage.

“He got Artist of a Lifetime [a few days ago] and I got to do this song, so if any of y’all missed that, I’m going to do it for you guys,” he said.

Travis posted about the Dallas concert on his Instagram page saying, “Had a blast at my friend Kane Brown’s concert at American Airlines Center in Dallas. Thank you for the [love].”

Watch Kane’s full surprise performance of “Three Wooden Crosses” with an appearance by Randy Travis, below!