By Manly Bryant on December 3, 2021
Advertisement 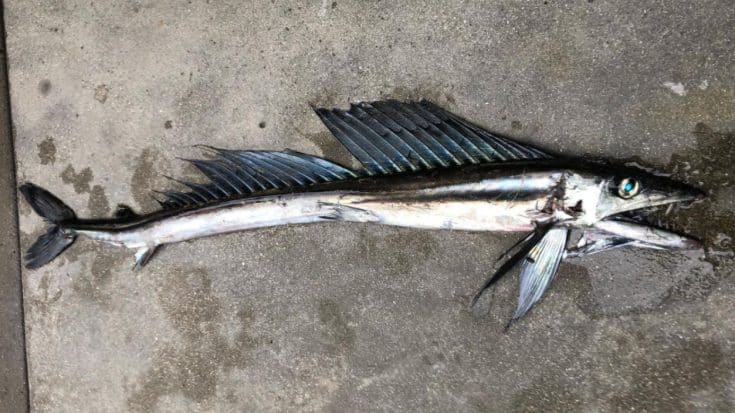 One of the ocean’s rarest fish, a lancetfish, washed up on the La Jolla Shores of San Diego, California and it was the 17th lancetfish to be found on a San Diego beach since 1947.

While the last one was found in 1996 Scripps Institution of Oceanography at UC San Diego were the first to be notified of the recent discovery by lifeguards on the beach who secured the dead animal.

Scripps Institution of Oceanography is an institute that preserves and analyzes marine life and when they got the call, they sent Ben Frable out to the location to collect the specimen.

Lifeguards said that the fish was found dead on Wednesday afternoon and they believe it simply washed up into shore.

The lancetfish is a dagger-toothed fish with large eyes and has a sailfin that goes down its long slithery body. The fish can grow up to seven feet long, according to the National Oceanic and Atmospheric Administration.

Lancetfish are ambush predators that stealthfully float in the deep and wait for prey to swim near them and then they pounce. They are known to eat numerous types of fish and invertebrates but are notoriously known to be cannibals and will devour their own kind.

They live offshore in the deep part of the ocean about 6,000 feet down and are known to “vertically migrate” to hunt. They have been spotted at the surface but it is usually rare to see them.

“Some important info for the public: If a person finds an unusual organism like this, do not take it home,” a Scripps spokesperson told Fox San Diego. “Much of La Jolla is a Marine Protected Area (MPA) and taking home organisms is prohibited.”

Authorities ask that if beachgoers find a fish washed up on the beach, they should notify the lifeguards or Scripps at 858-534-3624.