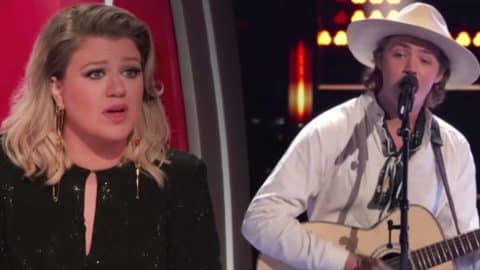 Singing To Backs Of Four Chairs

As a Voice hopeful takes to the stage for his or her blind audition, nothing is more intimidating than the thought that they may have to perform to the backs of four chairs the entire time.

Sometimes, the coaches can sense an artist’s potential right away, and turn for them after hearing just a few notes. This surely serves as a source of relief to the performer, who can feel a little more relaxed knowing they have a way onto the show.

But the longer the coaches remained turned toward the crowd, the more nerve-racking the audition becomes for the singer.

Longtime viewers of the Voice can usually predict when the coaches are going to leave their chairs unturned. But every now and then, they surprise you by flipping around at the absolute last second.

That’s exactly what two coaches did during 19-year-old country singer Carter Lloyd Horne’s blind audition in Season 16. The young singer was inspired to pursue his current career path after a cousin invited him to church, where he discovered a newfound passion for music.

From Marietta, Georgia, Horne is country through and through. Because of this, it only seemed fitting that he sang one of the biggest country hits in recent years…”Drinkin’ Problem” by Midland.

Released in February 2017 as Midland’s debut single, the track instantly put the traditional-sounding trio on the map. The song was a smash success, peaking at the third spot on the Country Airplay chart and crossing over to claim the 45th position on the all-genre Hot 100.

It’s a song that someone like coach Blake Shelton would obviously know well, and he recognized it right away when Horne sang it. You could tell that he and Kelly Clarkson were interested in his performance from the start, with Clarkson commenting early on that Horne sounded “pretty.”

How The Coaches Rescued Him

But as intrigued as they were by Horne’s audition, Shelton and Clarkson remained facing the crowd. It got to the point that Horne’s parents, and surely Horne himself, believed that he was going to be sent home.

However, their feelings of defeat were erased when, after Horne hit his final note, both Shelton and Clarkson turned their chairs around for him. It was at the literal last second!

The look of relief on Horne’s face perfectly summed up how he was feeling.

All of the coaches expressed their shock over Horne’s age, saying they believed he was much older than 19 because of his mature sound. Clearly seeing the potential in him, Clarkson and Shelton passionately expressed why they wanted him on their teams.

But it seems that everyone, even Clarkson, knew who the homegrown country boy was going to pick as his coach. He ended up with Shelton, who was thrilled to have the talented young singer on his team!

You can watch Horne’s nail-biting blind audition by tuning in to the clip below. We sure were getting nervous for him as each second passed and no chair turned. Luckily Shelton and Clarkson saved him!